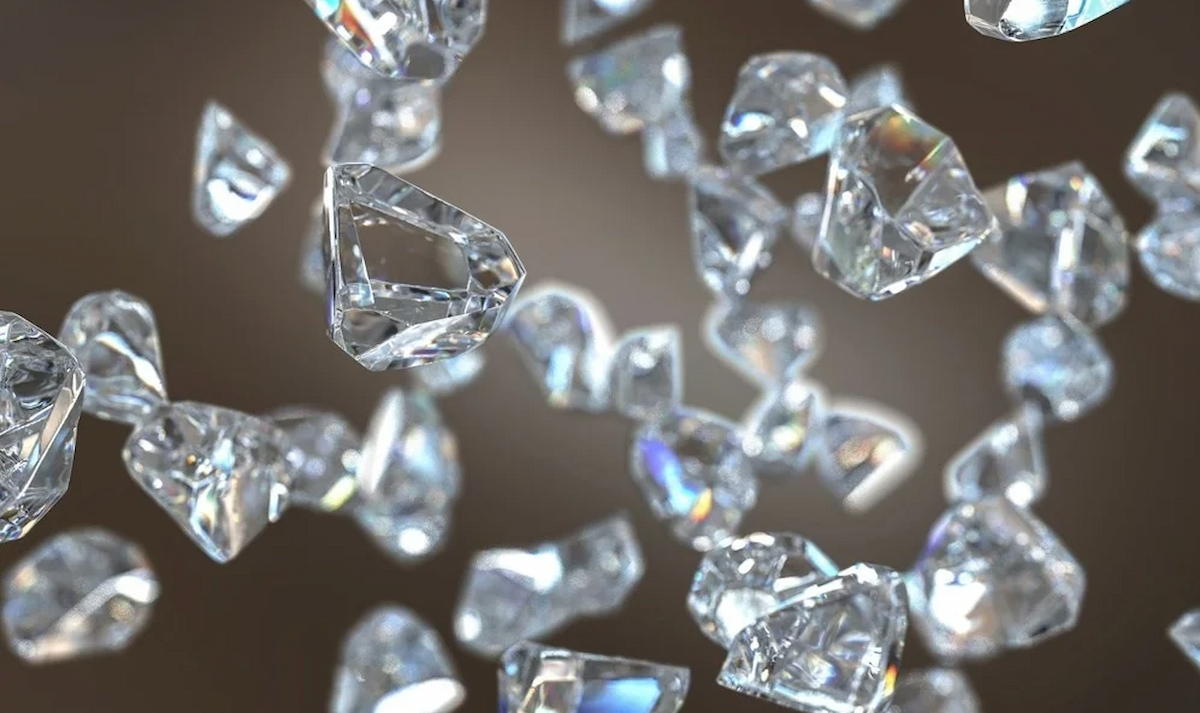 Scientists have been able to confirm the existence of an unusual new kind of water by blasting inexpensive plastic with extremely intense lasers. This process resulted in the transformation of the plastic into little “nanodiamonds.”

It is possible that these studies will show the existence of diamond rain on ice giants in our solar system, which would explain why these cold worlds have such peculiar magnetic fields. The use of the laser-blasting method to other aspects of Earth’s environment is another possibility.

Diamonds that are only a few nanometers in size are known as nanodiamonds. A nanometer is equal to one billionth of a meter. According to Dominik Kraus, a physicist at the Helmholtz-Zentrum Dresden-Rossendorf in Germany and one of the study’s co-authors, these nanoparticles have applications that are already in use as well as potential applications, such as converting carbon dioxide into other gases and delivering drugs into the body.

“Nanodiamonds might also be employed as ultrasmall and very precise quantum sensors for temperature and magnetic fields,” Kraus said, adding that this could lead to a wide variety of applications. According to him, the method might help lessen the amount of pollution caused by plastic by providing a financial incentive to clean up and repurpose trash found in the water.

Planetary scientists have had a nagging suspicion for a significant amount of time that diamonds are formed deep within the icy guts of ice giants like Neptune and Uranus. If these diamonds do develop, then they will “rain” through the innards of these frozen worlds if they do come into existence.

The researchers took a sheet of polyethylene terephthalate (PET) plastic — the kind of plastic that is used in the production of plastic bottles — and heated it with a high-powered optical laser located at the Matter in Extreme Conditions instrument in the Linac Coherent Light Source at the SLAC National Accelerator Laboratory. Their goal was to determine whether or not this method was practicable (6,000 degrees Celsius).

For barely a billionth of a second, this resulted in pressures that were millions of times higher than what is found in the atmosphere of Earth. This bone-crushing pressure shocked the plastic, forcing the carbon atoms in the plastic to reorganize themselves into a crystalline form while hydrogen and oxygen drifted through the lattice of this structure.

Kraus explained that by utilizing a strong X-ray laser, they were able to peer into the sample and generate movies of the chemical events that were taking place there. Within the timescale of our studies, which was just a few nanoseconds, we observed the creation of nanodiamonds inside the compressed polymers in an extremely efficient manner.

The newly published research suggests that this particular sort of diamond production might occur more frequently than was previously thought by experts. This finding raises the possibility that ice giants might have vast coatings of diamonds surrounding their solid cores. An unusual kind of water known as superionic water ice may materialize when exposed to the extreme temperatures and pressures that are typical of the interiors of frozen worlds. This conclusion is supported by the results of a recent experiment.

This peculiar kind of water has the ability to transport protons all the way through an oxygen atom lattice. Kraus hypothesized that the flow of protons through strange types of matter on ice giant planets like Uranus and Neptune, if such superionic water were to exist on such planets, could contribute to the formation of the unusual magnetic fields that have been seen on those planets.

Based on previous calculations, it was hypothesized that the presence of carbon atoms in the innards of planets would render any superionic water that might have developed there to be inherently unstable.

However, “our experiments now reveal that carbon and water are demixing,” which is defined as the unplanned separation of the constituents in a combination, through the formation of diamonds, as Kraus explained. Therefore, it is possible for there to be isolated water existing within the planets, which increases the likelihood of the development of superionic water. In addition, it is likely that in the not-too-distant future, a spaceship may be able to travel to our frigid neighbors in order to determine whether or not they genuinely have diamond rain and unusual water.

According to Kraus, “with any luck, during the next decade, a brand-new NASA space probe will be launched to Uranus,” which was just just determined to have the highest priority by the decadal survey. The discoveries may possibly have additional applications in the commercial sector. At this time, humans create nanodiamonds by detonating carbon or by shattering larger diamonds with explosives, which results in a mishmash of diamonds of varying sizes. According to Kraus, the new approach would be a more environmentally friendly way to produce diamonds of a specified size.