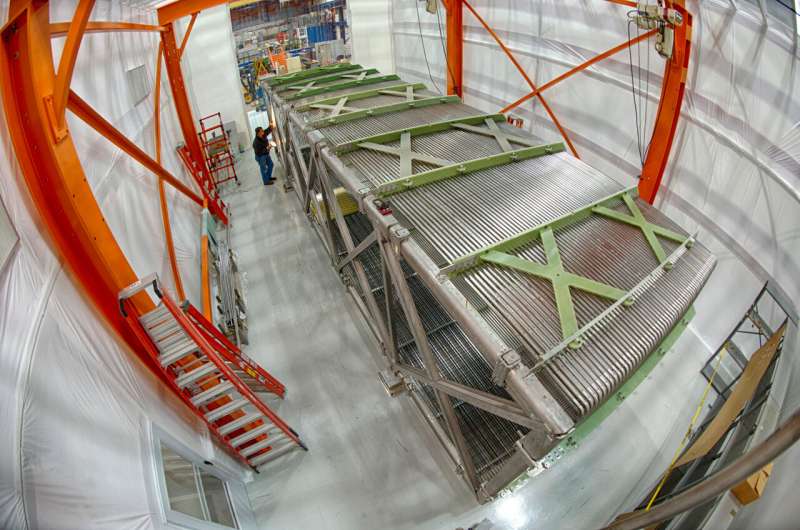 Physicists improve their ability to detect neutrinos in a cosmic haystack

In a “haystack” of particles streaming from space, how do you find a subatomic neutrino? Physicists studying neutrinos with detectors near the Earth’s surface face this daunting prospect. Surface-based neutrino detectors, which are usually looking for neutrinos produced by particle accelerators, are bombarded by cosmic rays, which are constant showers of subatomic and nuclear particles produced in Earth’s atmosphere by interactions with particles streaming from more distant cosmic locations due to the lack of shielding in such non-subterranean locations. These numerous travelers, mostly muons, form a tangle of crisscrossing particle tracks that can easily obscure a rare neutrino event.

Fortunately, physicists have devised methods for reducing the “noise” in the universe.

In two papers recently accepted for publication in Physical Review Applied and the Journal of Instrumentation, a team led by physicists from the US Department of Energy’s Brookhaven National Laboratory describes an approach (JINST). These papers show that scientists can extract clear neutrino signals from the Fermi National Accelerator Laboratory’s MicroBooNE detector (Fermilab). The technique combines CT-like image reconstruction with data-sifting techniques to make accelerator-produced neutrino signals stand out 5 to 1 against the cosmic ray background.

“We developed a set of algorithms that reduce the cosmic ray background by a factor of 100,000,” said Chao Zhang, a Brookhaven Lab physicist who assisted in the data-filtering techniques’ development. MicroBooNE would see 20,000 cosmic rays for every neutrino interaction if the filtering wasn’t in place, he said. “This paper demonstrates how important it is to be able to remove cosmic ray backgrounds.”

Bonnie Fleming, a Yale University professor and MicroBooNE co-spokesperson, said, “This work is crucial for MicroBooNE as well as the future of the United States’ neutrino research program. It will have a significant impact beyond the use of this ‘Wire-Cell’ analysis technique, even on MicroBooNE, where other reconstruction paradigms have adopted these data-sorting methods to drastically reduce cosmic ray backgrounds.”

Neutrinos are being tracked

MicroBooNE is one of three detectors at Fermilab that make up the international Short-Baseline Neutrino program, each of which is situated at a different distance from a particle accelerator that produces a precisely controlled neutrino beam. The three detectors are set up to count different types of neutrinos at increasing distances, looking for deviations from what’s expected based on the neutrino mix in the beam and what’s known about neutrino “oscillation.” Oscillation is a process in which neutrinos switch identities between three different types of “flavors.” Detecting differences in neutrino counts could lead to the discovery of a new unknown oscillation mechanism, as well as a fourth neutrino variety.

The MicroBooNE detector was designed in part by Brookhaven Lab scientists, particularly the sensitive electronics that operate within the detector’s super-cold liquid-argon-filled time projection chamber. As neutrinos from Fermilab’s accelerator enter the chamber, one will interact with an argon atom every now and then, kicking some particles out of its nucleus — a proton or a neutron — and generating other particles (muons, pions), as well as a flash of light. Charged particles ejected from the detector ionize argon atoms, knocking some of their electrons out of orbit. The detector’s sensitive electronics pick up the electrons that form along these ionization tracks.

“At one end of the detector, the entire trail of electrons drifts along an electric field and passes through three consecutive planes of wires with different orientations,” Zhang explained. “As the electrons approach the wires, they induce a signal, creating a 2D image of the track from a different angle for each set of wires.”

To reconstruct a 3D image of the neutrino interaction in the detector, computers convert the timing into distance and piece together the 2D track images. Scientists can tell which flavor of neutrino triggered the interaction by the shape of the track.

Zhang explained, “This 3D ‘Wire-Cell’ image reconstruction is similar to medical imaging with a computed tomography (CT) scanner.” Sensors capture snapshots of the body’s internal structures from various angles in a CT scanner, and computers stitch the images together. He explained, “Imagine the particle tracks going through the three wire planes as a person going into the scanner.”

Getting to the bottom of the cosmic web

If you don’t consider the thousands of cosmic rays that pass through the detector at the same time, it sounds almost simple. Their ionization trails also travel through the scanning wires, resulting in tangled web-like images. MicroBooNE scientists have been developing sophisticated “triggers” and algorithms to sift through the data and extract neutrino signals.

They had made significant progress in reducing cosmic ray noise by 2017. Even so, cosmic rays outnumbered neutrino tracks by a factor of about 200 to 1. The new papers detail additional techniques for lowering this ratio and flipping it so that neutrino signals in MicroBooNE now outnumber cosmic ray background by a factor of five.

The first step entails matching the signals emitted by particles produced during neutrino interactions with the exact flashes of light captured by photomultiplier tubes during that interaction.

Brooke Russell, a postdoctoral fellow at DOE’s Lawrence Berkeley National Laboratory who worked on the analysis as a Yale graduate student, echoed these comments on the difficulty of light-matching. “On a single-readout basis, there can be ambiguities in charge-light pairings because the charge information is not always fully complementary to the light information. The team’s algorithms assist in accounting for these nuances “she stated

The scientists must still compare the timing of each track to the time when accelerator neutrinos were emitted (a factor they know because they control the accelerator beam). “It’s a possible neutrino interaction if the timing is consistent,” Qian said.

The Brookhaven team developed an algorithm that reduces the ratio to one neutrino for every six cosmic ray events.

With an algorithm that eliminates tracks that completely traverse the detector, rejecting additional cosmic rays becomes a little easier.

“Most cosmic rays pass through the detector from top to bottom or one side to the other,” Xiangpan Ji, a Brookhaven Lab postdoc working on the algorithm, explained. “You’ll know it’s a cosmic ray if you can spot the track’s entry and exit points. Particles created by neutrino interactions must begin in the center of the detector, where the interaction occurs.”

Another algorithm filters out events that begin outside the detector and come to a halt somewhere in the middle, resembling neutrino events but moving in the opposite direction. Finally, a fine-tuning step eliminates events where the light flashes do not match the events well enough, bringing the detection of neutrino events to a remarkable 5 to 1 ratio when compared to cosmic rays.

“This is one of the most difficult analyses I’ve ever worked on,” Hanyu Wei, the Brookhaven Lab postdoctoral fellow in charge of the project, said. “The liquid-argon time projection chamber is a novel detector with a number of unique characteristics. We had to come up with a lot of new ideas. It was truly a collaborative effort.”

Zhang expressed a similar sentiment, saying, “We anticipate that this work will significantly increase the MicroBooNE experiment’s ability to investigate the fascinating physics of short baselines. Indeed, we’re excited to put these techniques to the test in experiments at all three short-baseline neutrino detectors to see what we can learn about neutrino oscillations and the possibility of a fourth neutrino type.”