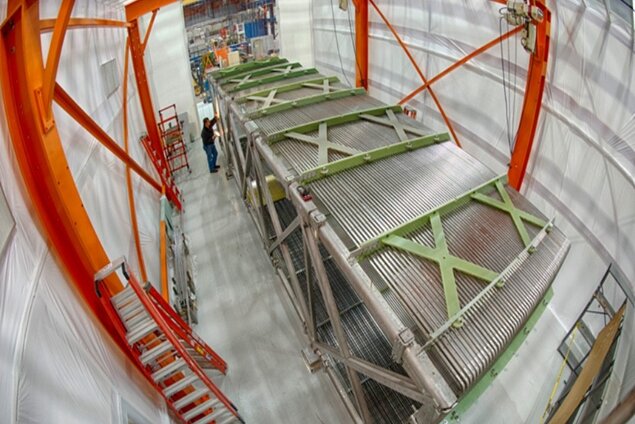 New Evidence in the Search for a Fourth Type of Neutrino, which has been ongoing for decades

In collaboration with Fermilab, the Columbia Neutrino Group co-led the photon analysis of the MicroBooNE neutrino experiment, which published its results on October 1st.

Despite the fact that neutrinos are the most numerous mass-carrying particles in our universe, they have little interaction with matter. Although this is the case, scientists have discovered that neutrinos may morph, or “oscillate,” from one kind to another when traveling great distances. Neutrinos are classified into three types: electron, muon, and tau.

It was in the mid-1990s that researchers discovered evidence that neutrinos may change shape over unexpectedly small distances, according to two tests conducted at the time. Since then, neutrino physicists have been perplexed by this oddity, which has raised the possibility that a fourth kind of “sterile” neutrino may exist to explain the rapid oscillations. It would be a significant breakthrough in particle physics if independent evidence of rapid oscillations and, by extension, sterile neutrinos could be obtained. This would have far-reaching consequences for our knowledge of nature.

The MicroBooNE neutrino experiment at the Fermi National Accelerator Laboratory in Chicago, operated by the U.S. Department of Energy (DOE), was begun in 2015 to determine whether a previously detected signal could be confirmed by a new form of neutrino detector, which was developed by the DOE. We wanted to determine if the signal was composed of photons or electrons, which would provide evidence in support of the sterile neutrino hypothesis. The MicroBooNE detector employs a powerful liquid argon time-projection chamber to image neutrino interactions at high resolution, allowing it to distinguish between neutrino-generated electrons and photons created by the neutrino interactions.

Mark Ross-Lonergan, a postdoctoral researcher in the Columbia Neutrino research group, presented the initial results from the photon search at a Fermilab Joint Theory-Experimental Seminar on Oct. 1, according to a press release. In the research, which was undertaken by partners at Columbia University and the Department of Energy’s Los Alamos National Laboratory, neutrino data from the previous three years were examined in order to identify any unique neutrino-produced photons.

The researchers discovered none, with a 95 percent confidence level, therefore ruling out this technique as the source of the abnormality. According to Georgia Karagiorgi, an associate physics professor at Columbia University who is also the project’s lead investigator, “this result represents a significant step forward in our understanding of neutrinos and their interactions.” “This result is the culmination of years of work to develop advanced data reconstruction and selection tools,” she said. “It also demonstrates the capacity of the liquid argon technology to distinguish between electrons and photons with great accuracy,” says the researcher.

According to Kathryn Sutton, GSAS ’21, who assisted in the single-photon analysis team’s leadership, “this high degree of reconstruction and signal categorization is what distinguishes the MicroBooNE measurement from previous observations.” “We used machine learning techniques to isolate an incredibly faint signal,” says the team leader.

The exclusion of neutrino-produced photons contributes a critical element to the whole jigsaw. “However, there are a plethora of other unusual processes or other exotic new physics models capable of creating electrons or other electromagnetic activity that we have not yet investigated,” says the researcher “Ross-Lonergan expressed himself as follows: “”Those are the targets for us next!”

Researchers at MicroBooNE are now trying to enhance their neutrino event reconstruction and selection tools, as well as to evaluate a new set of data collected by the experiment. Approximately one week after the conclusion of the MicroBooNE electron searches, the results are scheduled to be revealed.