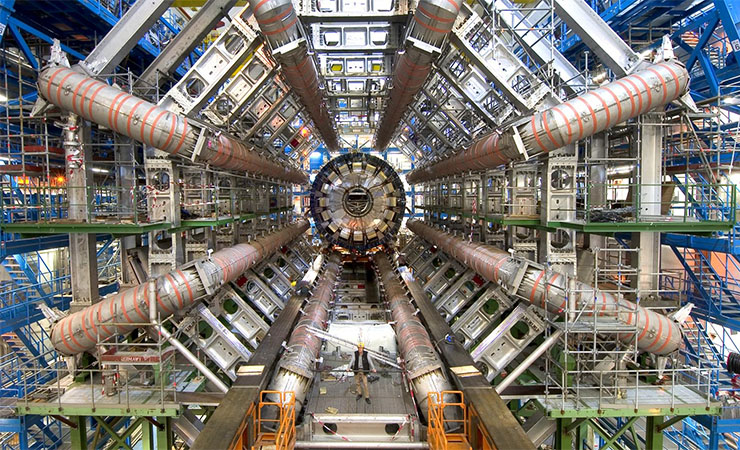 DOE officials have stated that the United States’ contributions to enhancements at CERN’s Large Hadron Collider may fall short this year, and that the department is taking a “conservative” approach to supporting the flagship LBNF/DUNE project, which has seen significant cost hikes.

Panel members and DOE officials reviewed strategic challenges facing the US particle physics community during this month’s meeting of the High Energy Physics Advisory Panel (HEPAP), which advises the Department of Energy.

The DOE’s HEP program has performed well in terms of topline budgeting during the last five years, with Congress raising spending by nearly $250 million, or more than 30%. Jim Siegrist, the program’s director, characterized the support as a good reaction to HEPAP’s long-range “P5” strategy study, which was completed in 2014, and emphasized that budget growth has well above the levels predicted in the report. However, as an external evaluation pointed out last year, much of the financing has gone to large and medium-scale programs, leaving less money for core research and particle accelerator and detector R&D.

Officials from the DOE indicated their intention to resolve the portfolio imbalance at the most recent meeting, but they also reported on budget challenges that several large-scale projects are facing in the short and long term. Separately, the officials presented updates on operations leading up to the next P5 report and discussed the possibility of HEPAP conducting a fast-turnaround analysis of the United States’ global status in particle physics.

Upgrades to the Large Hadron Collider are facing a financing deficit

Near the opening of the discussion, Siegrist acknowledged that budget plans for key HEP programs in the current fiscal year have caused “some upset” among the research community. The most pressing financing shortfall concerns DOE’s contributions to significant upgrading projects at CERN’s Large Hadron Collider (LHC), Europe’s world-class particle physics laboratory.

According to DOE official Mike Procario, the Biden administration sought a total of $40 million for the projects this year, a reduction from the prior appropriation of $73 million and far less than the estimated need of $90 million.

“It was evident [the projects] needed this money in order to continue to achieve the progress they needed,” he said of the events leading up to the request. This modification was made late in the budget process — days before it was announced — and was justified by relying on the reconciliation bill to fully fund the projects. ‘Oh, there’s plenty of money in the reconciliation bill,’ everybody who objected to the adjustment was told.

In September, the House Science Committee proposed including $224 million for the LHC renovations in what is now known as the Build Back Better Act, a political, multiyear spending package that Democrats hope to pass through the budget reconciliation process in Congress. However, in a later iteration of the plan, House Democrats withdrew most funding for DOE science initiatives, including the LHC financing, in order to reduce the bill’s overall spending from $3.5 trillion to less than $2 trillion.

Sen. Joe Manchin (D-WV), who chairs the Senate committee that oversees DOE research programs, was one of two Democratic senators who demanded a topline decrease. While it’s possible that Democrats will restore the funds as discussions continue, Manchin hasn’t said whether restoring financing for DOE science initiatives in the package is a top priority for him.

The outcome of the current fiscal year’s regular appropriations procedure is likewise awaited. The Senate’s proposal corresponds to the upgrade request, but the House’s does not mention a dollar number; however, both suggestions do not guarantee the final decision.

DOE has kept in touch with CERN about the issue, according to Procario, and the department is considering allocating $25 million to the projects as a stopgap to “avoid the worst repercussions,” though the idea still needs legislative approval.

If funding for the upgrades falls short of expectations, Procario said the difference will have to be made up in fiscal year 2023. He also warned that doing so could cause the Long-Baseline Neutrino Facility and Deep Underground Neutrino Experiment (LBNF/DUNE), the HEP program’s flagship project, to be delayed.

For the overbudget LBNF/DUNE, a ‘conservative’ path is being envisaged

Procario said the project’s appropriations have recently trailed behind expected levels, and that DOE is proposing a “conservative” funding profile in the future to account for recent cost increases.

The entire estimated cost of LBNF/DUNE to DOE has fluctuated over the last two years, ranging from less than $2 billion to more than $3 billion. CERN said in August that it would contribute a second cryostat, a vital component for the project’s low-temperature neutrino detectors, easing some of the pressure caused by gaps in international donations. According to Procario, international contributions to LBNF/DUNE have now reached $570 million.

Increases in other areas, on the other hand, have pushed the total project cost past a point where DOE must rethink the project’s basic concept. After a review this spring, when a new estimate for the project’s cost range will be created, Procario said DOE plans to formally reaffirm its support to the current design.

Instead of establishing a clear baseline cost for the entire project, Fermilab official Chris Mossey, who heads the US side of LBNF/DUNE, indicated that the aim is now to baseline components as they become mature enough. He added the project’s “far” site in South Dakota, as well as the first detector there, are “fully or virtually mature,” and baseline work would begin in January. A detector to be placed at the project’s “near” location at Fermilab, on the other hand, is considered 30 percent mature and will be baselined between 2023 and 2025.

Looking ahead, Mossey stated that the project aims to finish the installation of two detectors at the far site by 2029, but that due to the project’s conservative funding profile, work on the near site’s neutrino beam and detector would not be completed until 2031 and 2032, respectively. He claims that this method will allow study on neutrinos from supernovas and hypothetical proton decays to begin as soon as possible. He also mentioned that if more financing is granted early enough, construction on the project’s centerpiece neutrino beam could be accelerated.

The House Science Committee’s Build Back Better Act proposal included $1.3 billion for LBNF/DUNE, however those monies have subsequently been deleted, as have the LHC enhancements.

Following LBNF/long-term DUNE’s objectives, once the project is up and running with a beamline, a near-site detector, and two far-site detectors, emphasis will shift to the possibility of adding two more far-site detectors. That expansion would boost capabilities in line with the 2014 P5 report’s recommendations, albeit the decision to go ahead with it will be decided during the next P5 process.

The next P5 process is now in the planning stages. Following a year-long suspension due to the pandemic, the American Physical Society’s “Snowmass” planning exercise, which delivers community views on science goals in particle physics, will have its summer study conference in July.

In addition, the Department of Energy and the National Science Foundation are working on a proposal for a National Academies decadal survey of elementary particle physics, which will update a 2006 report.

According to Siegrist, the P5 process will begin in late 2022 and end in May 2023, with a report ready in time to inform fiscal year 2024 appropriations and the fiscal year 2025 budget request.

Siegrist also inquired about HEPAP’s reaction to the concept of doing an international “benchmarking” study similar to one recently completed for the DOE’s Basic Energy Sciences (BES) program. According to the findings of that study, the United States is losing its clear leading position in the facilities and research that the BES program supports. “I think the major challenge for the US is: how do we be the peer of choice that our international partners want to engage with,” Siegrist said, noting that HEP is a more globalized industry.

He cited U.S. work on niobium-3-tin superconducting magnets as an example of this dynamic, which will permit the LHC’s planned enhancements. “Not only CERN, but Europe as a whole accepted the United States continuing to work at the LHC because we offered something special to the table,” he stated.

Siegrist also mentioned that the BES study found gaps in US support for scientists’ career advancement, and that there have been anecdotal reports in HEP of the US losing prominent scientists to European recruitment attempts.

He went on to say that since the “tidal shift” in the 1990s, when the field’s center of gravity shifted to Europe, there hasn’t been a serious assessment of the US position in particle physics. “It was a long time ago….” And now since we’re trying to house thousands of people from all over the world on DUNE, it might be a good moment to take a look at this and see what we can do differently,” he said.

After polling panel members about Siegrist’s proposal, HEPAP Chair JoAnne Hewett came to the conclusion that a benchmarking study would be beneficial. “I believe we’ve signed up for more work, but I also believe we have the opportunity to do some good.” “After all, that’s what we all signed up for,” she said.