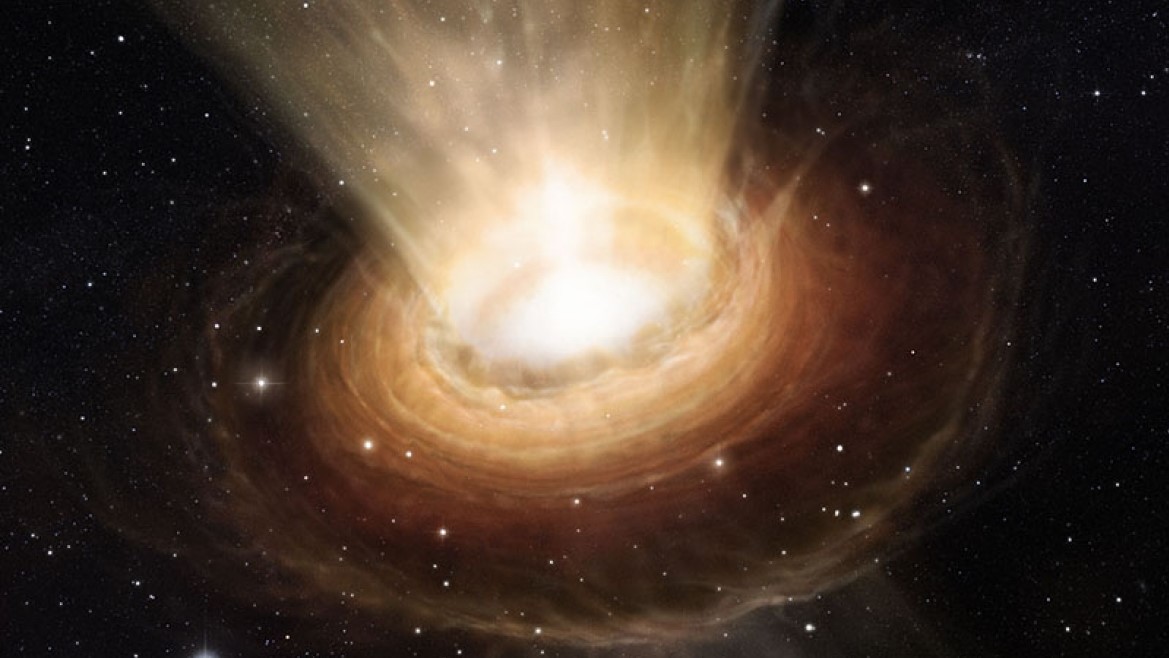 The IceCube neutrino observatory has discovered high-energy neutrinos coming from the active galactic nucleus (AGN) at the center of the Messier 77 galaxy. The galaxy, also known as NGC 1068, is home to a supermassive black hole, and the observations provide a glimpse into the ferocious processes that are thought to produce cosmic rays. The elusive neutrinos can easily pass through the Earth and hardly interact with other particles. For the purpose of observing incredibly rare collisions between cosmic neutrinos and water molecules, IceCube uses a cubic kilometer of ice beneath the South Pole. Fast-moving charged particles produced by these interactions lead to Cherenkov radiation, or light flashes in the ice. A network of more than 5000 detectors embedded in the ice catch the light, providing the IceCube Collaboration’s physicists with the information they need to determine where the neutrinos originated.

Five years after announcing its initial observations of high-energy cosmic neutrinos, IceCube made the first-ever discovery of a cosmic high-energy neutrino coming from the category of AGN known as a blazar. Currently, IceCube researchers are reporting the largest ever discovery of high-energy neutrinos. These 79 particles come from the galaxy M77, which is located 47 million light-years away. The collaboration believes that the neutrinos came from the AGN core of M77, which is normally obscured from view by a thick torus of dust and gas, and the observations were made between May 2011 and May 2020.

The 79 high-energy neutrinos are thought to have been produced by the AGN’s magnetic fields, which accelerate charged particles like protons to extremely high energies. The black hole will let some of these accelerated particles escape, turning them into cosmic rays. A scattering of mesons will be created when some of them collide with particles or photons inside the AGN. Then, these mesons quickly decay into neutrinos and gamma rays. The dusty torus of M77’s galaxy attenuates the gamma rays, but most neutrinos pass through unharmed, with some eventually making it to Earth. It is highly likely that the strong, twisted magnetic fields found inside an AGN are responsible for the particle acceleration. Where this magnetic acceleration takes place is unclear, though. The accretion disc of matter that swirls into the supermassive black hole or the glowing corona—the extremely hot region immediately surrounding the black hole—are two potential locations. Another possibility is that the matter jets that shoot out of the AGN in directions opposite to the accretion disc are where the acceleration takes place. The IceCube Collaboration’s leader, Frances Halzen of the University of Wisconsin, Madison, tells Physics World that the observations show that the neutrinos originate from the “cocoon,” a core region of the AGN where matter is blown outward by the jets and envelops the corona.

He explains that the [gamma-ray] photons, which are also produced alongside the neutrinos, have their energy dissipated in the dense core and emerge with lower energies. The NASA Fermi [gamma-ray] satellite confirms this by failing to detect the source within the energy range of the neutrinos. Even though it is generally accepted that an AGN’s hot accretion disc is the source of the vast majority of its radiation and particles, there has been growing skepticism about this thermal model of emission. Some AGNs, as noted by Andy Lawrence of the University of Edinburgh, exhibit variable brightness, and these fluctuations happen too quickly to be associated with changes in the accretion disc. Not affiliated with the IceCube project, Lawrence says, “It may be that a more sophisticated disc theory plus accompanying non-thermal emission in the disc corona or jet might do the trick.” This most recent IceCube observation appears to lend credence to the theory that particle acceleration takes place in the AGN’s corona as opposed to the accretion disc.

Though these 79 neutrinos won’t be enough to solve the mystery of particle acceleration in an AGN, the detector will be upgraded with the IceCube Generation 2 upgrade, which should be finished by 2033. According to Halzen, neutrino sources like AGNs are the focus of the Generation 2 design. In addition to having better angular resolution than IceCube, the detector will be over eight times larger. When put together, they’ll speed up detection time from ten years to just one year. There has been a lot of research done on Messier 77 by both amateur and professional astronomers. Therefore, M77 has the potential to become a Rosetta Stone for understanding other active galaxies if we can figure out how it generates high-energy neutrinos.