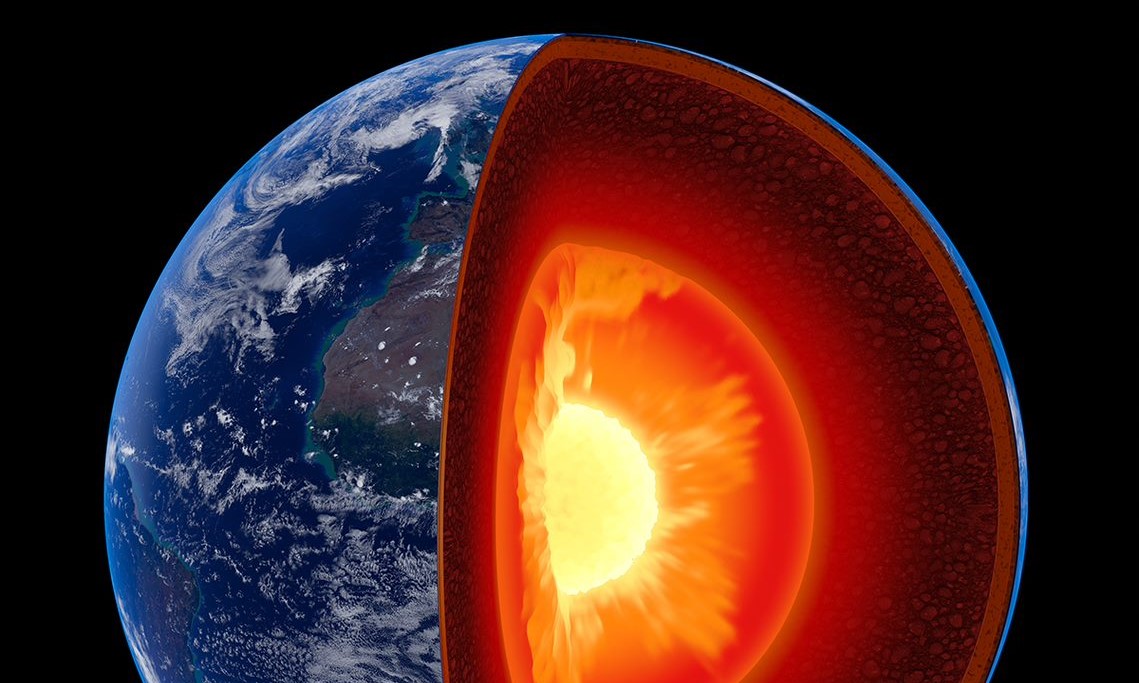 Elements might have been created both on Earth and in space

It’s possible that making metals lighter than iron doesn’t need the harsh circumstances observed within supermassive stars. It is feasible that oxygen, nitrogen, and all other elements with atomic numbers up to 25 have been generated inside the Earth, according to a group of physicists from Japan and Canada. Their intriguing assertion is based on the assumption that fusion processes take place in the Earth’s lower mantle, where neutrinos and excited electrons accelerate the reactions.

The only elements existing in the early cosmos, according to the Big Bang scenario, were hydrogen, helium, and trace quantities of lithium. Elements with atomic numbers between four (beryllium) and twenty-five (manganese) are considered to be created instead by the gradual fusion of larger nuclei within big stars. This process comes to a halt because, unlike lighter elements, iron (atomic number 26) does not emit extra energy and hence is incapable of preventing stars from collapsing under their own weight. The supernovae that occur, on the other hand, produce high-speed neutrons that are grabbed by nuclei and used to generate elements heavier than iron.

Mikio Fukuhara of Tohoku University and colleagues from Japan and Canada recently published a paper suggesting that these lighter elements can likewise be formed deep under the Earth. The development of the Earth’s atmosphere provided the inspiration for this concept. As the researchers point out, carbon dioxide is thought to have made up practically all of the atmosphere at one time. However, the makeup of the atmosphere significantly altered after then, with nitrogen dominating – nitrogen now accounts for roughly 78 percent of all molecules in the atmosphere – as well as substantial amounts of oxygen (some 21 percent), and carbon dioxide accounting for just 0.2 percent.

Many scientists believe that much of the nitrogen came from the solar nebula, a gaseous cloud that condensed and conglomerated to form the Sun and its planets, according to Fukuhara. As planetesimals rich in nitrogen collided with our planet, more nitrogen was released. However, he claims that this theory cannot account for the fast buildup of nitrogen-14 that occurred between 3.8 and 2.5 billion years ago.

The answer, according to Fukuhara, might be terrestrial nuclear fusion. He postulated in a model published last year that nitrogen, oxygen, and water – all of which have increased in concentration over time – were formed in endothermic processes within the Earth’s mantle. Carbon and oxygen nuclei contained inside the crystal lattice of calcium carbonate rocks would be involved in these processes.

Even extremely high temperatures and pressures at depths of thousands of kilometers would not be enough to push those nuclei together despite their mutual repulsion, as he pointed out. However, he says that the existence of neutral pions, which are subatomic particles, can boost nuclear attraction to the point where fusion happens. Electrons triggered by the fast fracture and sliding of carbonate crystals — induced by volcanic eruptions – would produce those pions, he claims. Neutrinos would be caught with the excited electrons as they stream in vast quantities through the Earth from the Sun or other stars, or alternatively from nuclear processes in the Earth’s core.

The current discovery extends previous work by demonstrating how such catalyzed fusion processes might explain not just the formation of nitrogen, oxygen, and water, but also the production of all 25 lightest elements. The researchers determined the minimal energy necessary to activate each reaction and then examined the crystal structure of a mineral found in the mantle that includes the reactive elements to prove the mechanism’s plausibility.

Temperature, pressure, and catalysis are all factors to consider

They carried out the latter portion of the study for three sets of nuclei: magnesium and iron, aluminium and magnesium, and aluminium and silicon, according to an article published in AIP Advances. In all three situations, they found that combining temperature, pressure, and catalysis reduced the interaction distance between the nuclei sufficiently to allow them to fuse, generating sulphur and titanium, sodium and silicon, and oxygen and potassium, respectively.

Fukuhara and colleagues emphasize that their hypothesized fusion mechanism is still a theory that has to be tested in high-temperature, high-pressure studies. However, they claim that if their findings are validated, it will have a significant influence on geophysics. “Theories of element formation have not been previously articulated in the setting of a ‘Earth factory,'” they write.

They go on to say that they’re doing further calculations to see if the process they’ve discovered also applies to elements heavier than iron. Furthermore, they allude to a potential application of their work, claiming that it has the ability to build ingredients required for space travel. “We don’t need to search for oxygen, water, or other elements in planets and satellites,” Fukuhara adds.