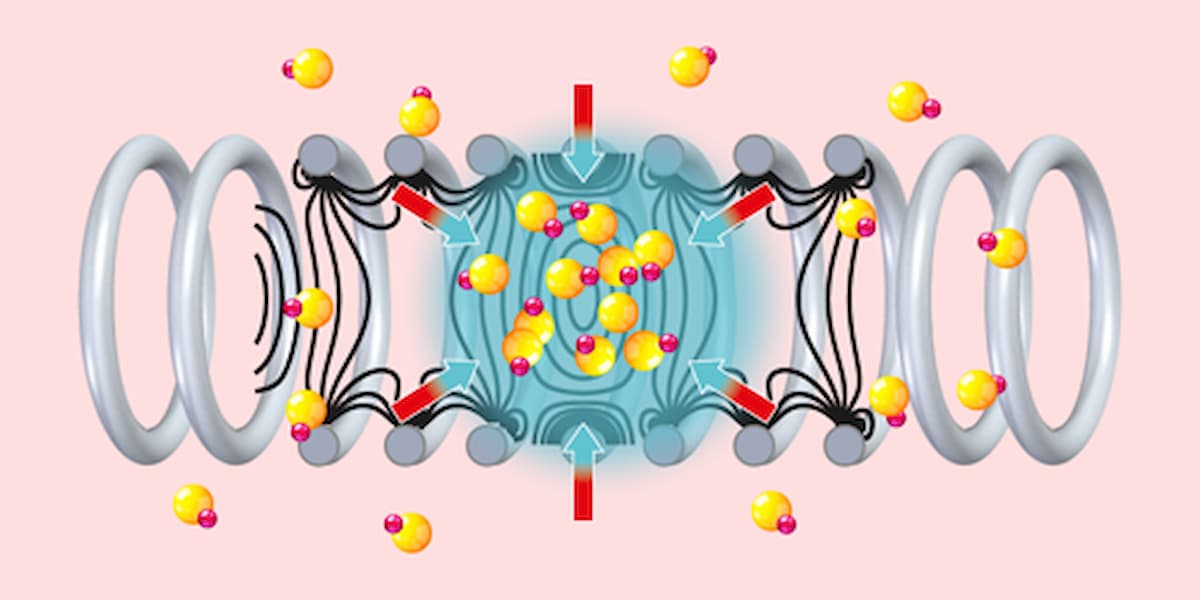 Major accelerator facilities, such as CERN’s Large Hadron Collider, or massive subterranean detectors for neutrinos, dark matter, and other exotic particles, are frequently used in the search for physics outside the Standard Model. Researchers in the Netherlands have now opened a new front in the search for heavy neutral molecules by creating a novel laboratory-scale technique for trapping them. Despite the fact that such molecules are great candidates for detecting beyond-the-Standard-Model asymmetries in the electron’s electric dipole moment (eEDM), earlier approaches were unable to confine them. As a result, the approach provides physicists with a new set of instruments for discovering new physics.

High-precision spectroscopy on atoms or molecules that are first slowed and then trapped using lasers or electric fields for the duration of the measurement is a standard method used in eEDM searches. The challenge is that discovering new physics may necessitate trapping molecules that are too heavy for lasers to confine. In contrast to neutral atoms or molecules, electric fields can only trap heavy ions.

Researchers at the University of Groningen have added a new method to the list, which they developed in partnership with colleagues at Vrije Universiteit Amsterdam and Nikhef, the Dutch particle physics institute. The researchers start by making strontium fluoride (SrF) molecules using a chemical reaction that takes place inside a cryogenic atmosphere at roughly 20 K. The initial velocities of these molecules are 190 m/s, compared to roughly 500 m/s at ambient temperature.

The molecules then enter a Stark decelerator, a 4.5-metre-long device that uses alternating electric fields to slow and then stop them. The SrF molecules are confined for 50 milliseconds before being analyzed by the researchers using a separate laser-induced fluorescence detecting device. These measurements disclose fundamental electron properties, such as the eEDM, which can subsequently be examined for asymmetry.

The more weight, the better

According to Steven Hoekstra, a physicist at Groningen and the study’s senior investigator, these SrF molecules are about three times heavier than other molecules previously trapped using comparable procedures. “Our next step will be to capture even heavier molecules like barium fluoride (BaF), which is 1.5 times heavier than SrF,” he explains. “This type of molecule is even better for electron dipole measurements.” In general, the heavier [the molecule], the more accurate these readings will be.”

Beyond eEDM studies, trapping heavy molecules has further applications. Studying collisions between molecules at low energies, under conditions comparable to those observed in space, is one example. Slowly moving molecules could possibly provide more information on the quantum nature of their interactions. The so-called dipole-dipole interaction, which is dependent on the orientation of the molecules relative to each other, makes a huge impact in how they interact at high enough densities. These observations open up possibilities that aren’t available with stationary atoms that don’t interact in this way.

Hoekstra and his colleagues want to boost the sensitivity of their measuring setup by increasing the intensity of their molecular beam as a next step. He told Physics World, “We’re also thinking about capturing more complicated compounds like BaOH or BaOCH3.” “We may also use our method to investigate asymmetries within chiral compounds, such as those with a left and right-handed version.”

The conclusion represents the culmination of roughly 20 years of research on molecular deceleration, according to Ben Sauer, a physicist at Imperial College in the United Kingdom who was not involved in the current study. He believes it will have a significant influence on eEDM precision measurements, since the measurement resolution is directly related to the time available to probe the molecules. “I can see it being used to some unique instances,” Sauer adds of broader possibilities. Because most chemistry takes place at the top of the periodic table, I believe the limit is that light molecules are much more interesting than heavy molecules. However, it’s fantastic for physics research.”