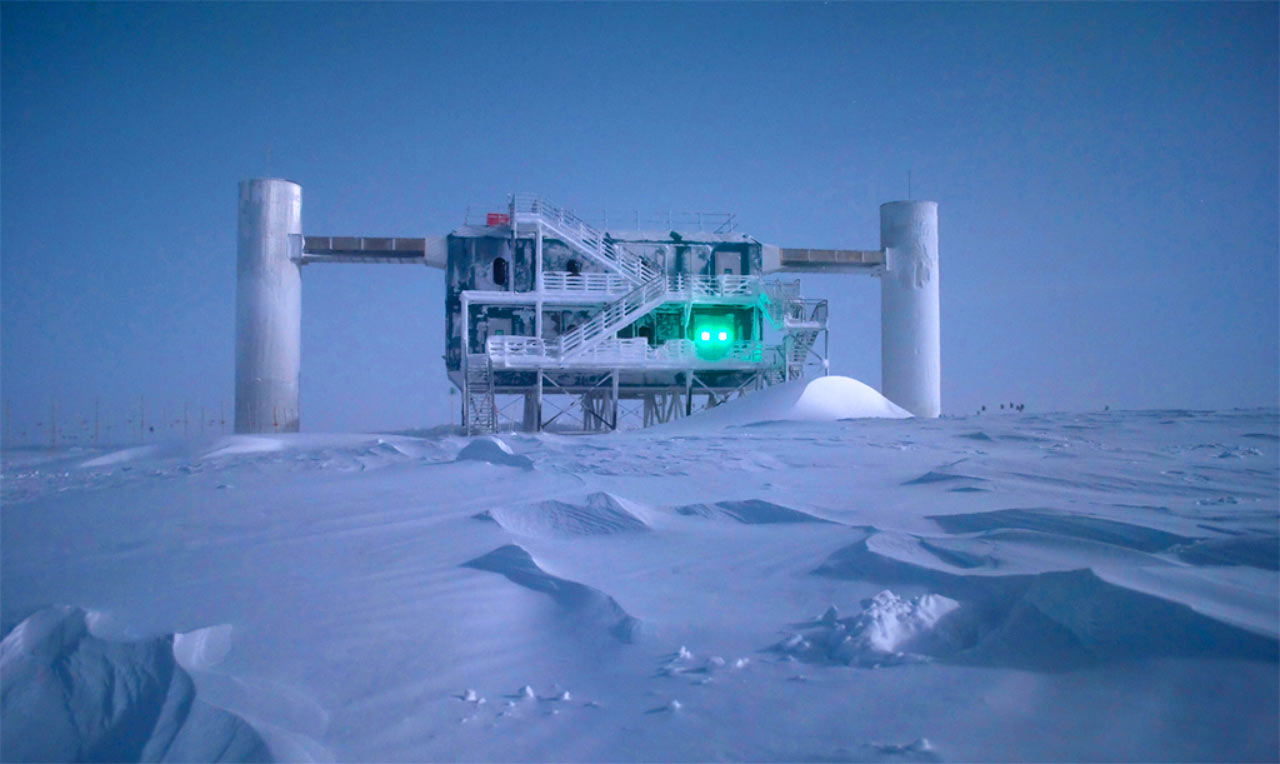 The human body is exposed to 100 trillion trillion neutrinos each second. These minuscule, nearly massless particles, which are produced by some of the universe’s most intense occurrences, travel great distances over space while carrying information about their origination. Neutrinos, however, are exceedingly challenging to find, necessitating a unique detector that can “see” these essentially invisible particles. The IceCube Neutrino Observatory, which is situated at the South Pole, was finished on December 18, 2010. The detector, which is buried in a cubic kilometer of Antarctic ice, is made up of a collection of 5,160 optical sensors known as digital optical modules (DOMs), and it was created to look for high-energy cosmic neutrinos. A phenomenon known as Cherenkov radiation occurs when a neutrino interacts with a molecule of ice, producing secondary charged particles that emit blue light. After passing through the ice, the light may eventually get at some of the DOMs, where it is detected. Using information about the ice’s optical characteristics, researchers may then recreate the particle’s energy and direction.

The IceCube Collaboration first noted an unusual observation in 2013, known as “ice optical anisotropy,” in which the brightness of a light source was discovered to depend on its direction of propagation. Researchers have made several valiant attempts, but to no avail, to explain the anisotropy with modifications to impurity-induced absorption and scattering. IceCube presents an optical effect that hasn’t been previously mentioned in a fresh study that was submitted to The Cryosphere. The effect is caused by the elongated ice crystals’ birefringent characteristics, which divert light in two directions. SpiceBFR, a new birefringence-based ice optical model used in detector simulation, incorporates the newly acquired knowledge, which has significantly enhanced the interpretation of the light patterns brought on by particle interactions in the ice. According to Dmitry Chirkin, an associate scientist at the University of Wisconsin-Madison, “the ice optical model used by the IceCube Collaboration has been under development since the early days of the predecessor experiment AMANDA.” “The disappearance of trapped air bubbles at depths well above the detector and the fact that the South Pole ice sheet has the cleanest ice on the globe at deeper depths are two recent additions to our understanding of the ice that have been made over the past 20 years. The optical ice anisotropy, which is the focus of the study that was inspired by the new knowledge in our publication, is another discovery.”

The researchers thoroughly examined the anisotropy effect in order to improve upon earlier descriptions of anisotropy. They discovered a connection between the anisotropy effect and the depth development of ice crystal characteristics. This gave the researchers reason to think that the numerous microscopic crystals that make up the ice were responsible for the anisotropy they had noticed. Dr. Martin Rongen, a researcher at Johannes Gutenberg University Mainz (JGU) and the lead on the investigation, said: “Things really got rolling when we recognized that curved photon trajectories with tiny, subdegree per meter deflections would be able to adequately characterize the data. In fact, a mean deflection occurs when calculating and simulating the light dispersion through polycrystalline ice, such as that found in IceCube, where crystals are often elongated along the ice flow direction.

For the investigation, scientists ran simulations that simulated various routes the light might take inside the detector. After that, they compared the generated data to a sizable calibration dataset obtained from IceCube. The 60,000 LEDs that are fitted to every DOM and used to calibrate the ice’s optical characteristics are included in the IceCube calibration data collection. These LEDs continuously transmit light pulses into the ice. Researchers were able to determine the average size and form of the ice crystals within IceCube by comparing the two. This fascinating new finding inspires the creation of fresh simulations and the modification of existing reconstruction techniques to take the SpiceBFR model into consideration. This new knowledge has implications for the entire field of glaciology in addition to helping IceCube improve its reconstructions of neutrino interactions. Ice crystal qualities are specifically investigated in order to comprehend ice flow mechanics, which can then be used to forecast the Antarctic mass balance and ensuing sea-level rise in a changing climate, according to Rongen.