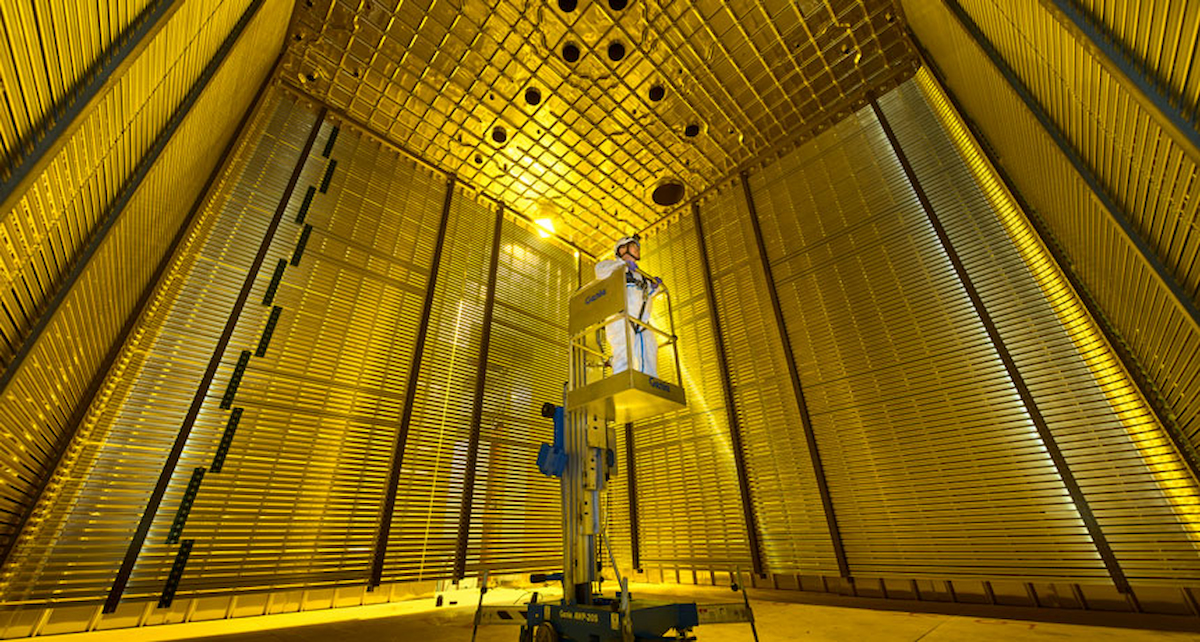 At the Fermi National Accelerator Laboratory of the U.S. Department of Energy, a new neutrino detection system that is roughly the size of a small, two-story house has been assembled after four years. The system, which was created for the Short-Baseline Near Detector, will soon be transported from the assembly building to the detector hall across the Fermilab campus. Neutrinos are enigmatic particles that may hold the key to resolving a number of issues regarding the nature of our universe. Neutrinos come in three different varieties, according to scientists. According to the findings of some experiments, there might be more. SBND is one of three detectors that will be used at Fermilab to study the behavior of neutrinos as part of the Short-Baseline Neutrino Program. The detectors’ combined precision will allow them to measure short-range neutrino oscillations. This research is being carried out by about 300 scientists from more than 50 organizations in Brazil, Italy, Paraguay, Spain, Switzerland, the United Kingdom, and the United States, including CERN.

To detect neutrinos at various separations from the target facility that generates the neutrino beam for the measurements, the SBN Program uses three different liquid-argon time projection chamber detectors: SBND at 110 meters, MicroBooNE at 470 meters, and ICARUS at 600 meters. Neutrinos could change into a potential fourth type of neutrino, the sterile neutrino, as they travel this far. It is very challenging to find this particle, if it even exists, because it doesn’t interact with regular, atomic matter. However, using three detectors positioned at different separations from the target, researchers can determine whether neutrinos oscillate or transform into one another as they approach the farthest detector. Any departure from the three-neutrino model’s predictions could point to the existence of a sterile neutrino or other new physics. “Putting the detector together with such a great, diverse group of people was just wonderful.” — Co-lead for the detector assembly Nicola McConkey

Due to its proximity to the beam source, SBND is the detector that will give information on the neutrino beam’s initial makeup. By determining the composition, scientists will have a baseline assessment of the different types of neutrinos that are present in the beam before they travel and arrive at the following two detectors. Following that, researchers can compare data from the three detectors and draw conclusions about the different neutrino interactions in each detector. Ornella Palamara, a neutrino scientist at Fermilab and a co-spokesperson for the SBND collaboration, explained that we will determine whether an oscillation is occurring or not by comparing what we observe in the near detector with what we observe in the far detector. The long-standing question regarding the existence of a potential fourth type of neutrino will be resolved if these oscillations are found. The existence of sterile neutrinos would be demonstrated by a difference in the amount of a neutrino flavor detected from one detector to the next. The program has other objectives besides finding the sterile neutrino. Palamara claims that the SBND will also gather a sizable amount of information regarding neutrino interactions with argon. The interaction of a neutrino with argon’s protons and neutrons is complicated because of the element’s relatively heavy nucleus, and there is currently a paucity of information.

We don’t have a lot of information on neutrino-argon interactions, so the SBN Program will be a significant step forward in this area, according to her. The knowledge gathered by the SBN Program will be useful for other neutrino experiments that use liquid argon, like the global Deep Underground Neutrino Experiment, hosted by Fermilab. The program’s third objective is to look for physics that goes beyond the standard model. Other theoretical models also offer potential explanations and will be tested with SBND and the SBN Program. The existence of sterile neutrinos is one explanation for anomalies seen in previous neutrino experiments. Palamara stated, “We are closely collaborating with numerous theorists. “Through this partnership with them, we experimentalists will be able to test many of those models,” The detector’s construction has not been easy. The detector’s components had to be carefully transported to Fermilab from countries all over the world, including the United Kingdom, Switzerland, and Brazil. Teams from all over the world that were required to put SBND together had to travel to Fermilab during the pandemic in addition to bringing the parts. Despite these difficulties, those involved in the project have enjoyed working on the detector.

Nicola McConkey, a researcher at the University of Manchester and the co-lead in charge of the detector assembly, remarked that the team was “such a great group of people with a lot of positivity and just general camaraderie while working together in what was not the easiest of times.” “Putting the detector together with such a great, diverse group of people was just wonderful.” McConkey has been involved with SBND since the beginning of the project and has had the opportunity to follow the progression of the British components from their manufacture to installation in the detector. She remarked, “Seeing how everything was constructed was really helpful. “That really helped me understand how it should fit together and the potential issues we needed to be on the lookout for.” To keep the assembly process free of dust and damaging ultraviolet light, the assembly took place inside a cleanroom made of yellow plastic windows. The group rejoiced when significant tasks were completed, such as putting the two anode wire planes on either side of the detector and removing the covers from the cathode plane. It has been wonderful to see things in real life that we had previously only seen in models, according to McConkey.

The light detection systems were the final components to be put together. The scintillation light generated by neutrinos interacting with argon atoms will be captured by them. Both conventional photomultiplier tubes and new silicon-based ARAPUCA devices, which trap photons with filters, are used. The cutoff of the filter prevents photons from leaving this device when they enter, according to Ana Machado, who developed the ARAPUCA technology and oversaw the production of the devices for SBND. The photons are detected by silicon photomultipliers after a few reflections. The original ARAPUCA technology will be modified and used by SBND under the name X-ARAPUCA. The first detector to use this improved technology to detect neutrino interactions will be SBND. Additionally, X-ARAPUCAs will be used in the Deep Underground Neutrino Experiment detectors. The new equipment’s installation and use in SBND will be a crucial test for its application in DUNE. The assembled neutrino detection system will then be transported to the detector hall and lowered into the SBND cryostat, which will house it along with 112 tons of liquid argon. To keep the argon in a liquid state, the cryostat will keep it at extremely low temperatures. The full detector is expected to be ready for commissioning in the summer of 2023, according to the SBND collaboration.