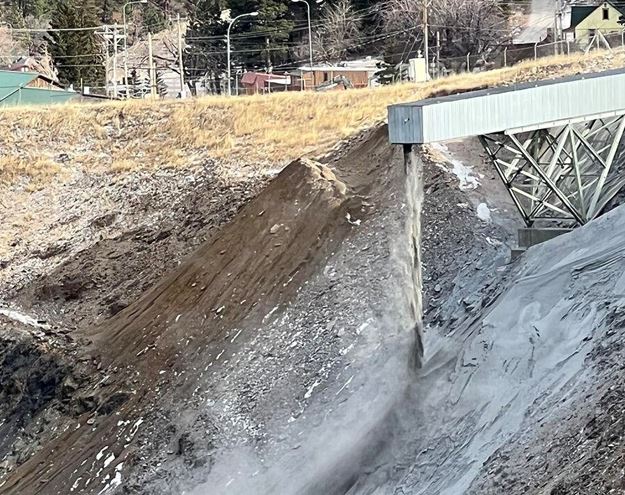 Fermilab has resumed rock disposal with hopes to control dust

Rock dumping activities resumed Thursday afternoon, but not before Fermilab officials met with worried locals to explain their dust reduction plan, the first in a series of public sessions that they promise would be held.

The gathering drew a modest audience of individuals to the Homestake Opera House on Wednesday, but inclement weather prevented many people from attending. The conference was inaugurated by Chris Mossey, project director for the Long Baseline Neutrino Facility/Deep Underground Neutrino Experiment, who announced that it will be filmed and made available for others to view online.

The meeting was led by Josh Willhite, the project’s design project manager, who outlined how the Fermilab team has been working on this topic since before the conveyor started functioning.

Willhite remarked, “It’s been argued that we didn’t think about this.” “That isn’t correct. We did give it a lot of thought.”

Fermilab personnel talked with various experts and did several lab tests to evaluate dust control management before turning on the conveyor in June, according to Willhite. Tapered Element Oscillating Microbalance (TEOM) devices were fitted to pull air in and monitor the amount of dust particles released. This, together with other initiatives, gave officials “misplaced confidence” in their dust mitigation efforts, according to Willhite.

“We had received input from the community that dust was a worry, and I figured we’d be able to utilize that data to verify the dust wasn’t coming from us,” he added.

However, Willhite stated in June that his staff was aware of a dust problem immediately away. When foggers and a sprinkler system failed to contain the problem, and a chute intended to move the rock deeper into the Open Cut failed, the team began looking for additional options for dust control. It decided to use a tackifier whose main constituent is glycerol, which can be found in a variety of food and beauty goods. To prohibit dust particles from blowing around, the tackifier adheres to them. Willhite told the audience that a Safety Data Sheet for the Nalco EnviroGreen 2600 substance is accessible on the Fermilab website, in a specific area dedicated to Frequently Asked Questions regarding the dust.

“We needed to make sure that whatever we put on this material wouldn’t have an influence on the water treatment plant if it washed off,” he explained. “We had to run lab testing to make sure it wouldn’t have an impact on their ability to discharge water.” ‘Not hazardous material or mixture,’ says the first line of this Safety Data Sheet. In the Open Cut, it’s a really safe material to utilize.”

Willhite stated that the tackifier has been in use by his team since November. While he claims it is quite successful, he claims it does not spread and has not been able to form a cap over the existing rock layer in the Open Cut, which is exposed to the wind.

In terms of dust control, Willhite said his team will continue to use the tackifier but will also take additional steps to keep the dust contained. One of the essential parts, he said, will be assigning a staff member to monitor the rock as it is deposited into the Open Cut. He claimed that if any dust gets past the fence line, a staffer will be dispatched to stop off the dumping activity.

“That will continue until everyone is satisfied that it is no longer necessary,” Willhite explained. We estimate that it will take months.”

Willhite also stated that his team will closely monitor weather forecasts and reports. There will be no rock dumping if there is a prediction or threat of winds over 15 miles per hour. “We’re not even going to try,” he declared.

While the tackifier is an excellent option, it does not completely cover the rock pile on the Open Cut benches. That is why the LBNF/DUNE team has partnered with Parkston, South Dakota-based Williams Drone. Willhite said the business will fly a 7-foot drone above the Open Cut starting next week, or whenever weather conditions are favorable, to spray Dust Bind material on the rock pile. According to him, the coal business regularly sprays the same product over the top of coal that is loaded into trains to keep the coal from blowing off during transit. Safety Data Sheets for that item will be put to the website as well, although Willhite informed the public that it is a non-hazardous alcohol-based material.

Installing a new chute that will send the rock further down into the Open Cut is the final move the Fermilab team is taking to manage the dust. The chute is slated to arrive the week of December 27 and will be erected right away.

“We want to test the chute at higher wind speeds once we build it to see if it works,” Willhite added. “We’ll keep an eye on it and shut it down if it’s not working.” With the capping substance we’re spraying with the drone, we’ll do the same thing.”

Overall, Willhite said, the LBNF/DUNE team has been working closely with the city of Lead and the South Dakota Science and Technology Authority to come up with a viable plan of action for moving forward. In addition to the dust reduction measures, Willhite said the team has agreed to hold another public meeting in January, another in February, and then quarterly meetings to inform the public about their efforts.

See also  New Evidence in the Search for a Fourth Type of Neutrino, which has been ongoing for decades
0 Comments Author Neutrino Science