What Is a Neutron Star, Anyway?

In the Milky Way, one out of every hundred stars is of the ‘neutron’ form. These are things that are so dense that their insides squish together until they resemble a single massive atomic nucleus.

It is, however, a unique atom in that it is disproportionately composed of neutrons.

To figure out where these neutrons originate from, we need to take a look inside a neutron star’s layers and see how the massive gravity impacts individual particles’ personal space.

What causes neutron stars to form?

A conflict rages deep within every star. As heat created by nuclear processes pushed out, gravity pulls in, forming a reasonably stable ball of plasma.

The nuclear reactors will cool sooner or later. The loss of heat causes the colder outer gas of stars 10 to 30 times the mass of our Sun to drop rapidly under gravity’s pull, gathering speed until it crashes into the dense clump of hot iron that formed in its last moments. 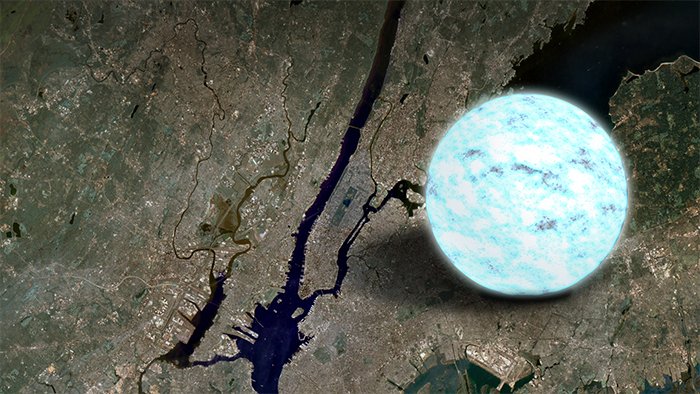 In a sort of supernova explosion, the shockwave creates a massive surge of energy, shooting a wave of hot gas and radiation into the universe. All that’s left is the iron core, which is somewhat heavier than the Sun and squeezed into a space 11 kilometers (6.8 miles) wide with a thin (about a meter thick) atmosphere of trapped hydrogen and helium.

This ball’s gravity is as ridiculous as it gets for a visible structure. You’d feel the pull of nearly 100 billion Gs of gravity if you stood on the surface of this city-sized chunk of iron.

Some extremely strange physics is going on beneath your feet.

The nuclei of iron tumble into a massive crystalline shape defined by the collective pushing of countless positive charges under extreme pressure.

A cloud of electrons buzzes freely between the gaps of this crystal, dangerously close to the nuclei due to the tremendous pressure. The packed conditions imply that electrons have a better chance of being located directly inside a proton, transforming the pair into a freshly baked neutron and neutrino, thanks to quantum physics regulations. Neutrons are a type of neutral subatomic particle that has a mass similar to that of a proton but no electric charge. Neutrinos are virtually massless neutral subatomic particles.

The teeny-little neutrino is tiny enough to escape the mass. The neutron, on the other hand, persists, resulting in bizarre isotopes with the mass of iron but significantly fewer protons.

Inside a neutron star, what type of atoms are there?

As we go deeper into the structure, we may come across atoms that are so neutron-heavy that they begin to shatter. According to theory, neutrons ‘drift’ apart as a thick gas in this mind-boggling expanse, pushing apart under a pressure defined not by their charges but by a law that states identical particles of this sort can’t occupy the same space at the same time.

This ‘crust,’ which is about a kilometer within the dead star, is now a neutron fog with a few protons thrown in for good measure. The nuclei are so close together that they might rub against one other.

As gravity increases, previously familiar atomic structures transform into unusual configurations resembling different types of pasta such as spaghetti and lasagna, sculpted by a balance of the strong nuclear force and a touch of positive repulsion.

Physics gets much bizarre as you go closer to the core of neutron stars. When neutrons (and the odd proton that hasn’t transitioned) are forced into a paired configuration, they acquire new identities that allow them to defy all kinds of earlier laws, causing strange currents.

It’s likely that gravity pushes neutrons to lose all of their individuality at the very center, resulting in a’mush’ of their fundamental particles, quarks.

If the quarks were squeezed any closer, they would overlap, collapsing into a point so small that we couldn’t comprehend it. To put it another way, it would turn into a black hole.