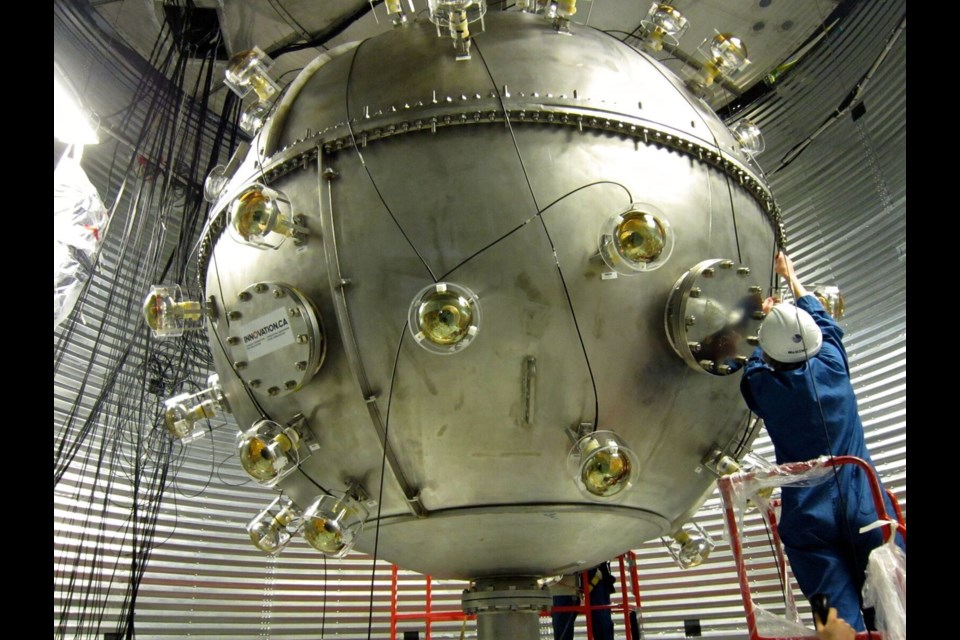 SNOLAB, the Nobel Prize-winning laboratory, is celebrating its tenth anniversary, but there’s a lot going on inside the laboratory, which is two kilometers below at Vale’s Creighton nickel mine site.

SNOLAB’s activities seem like something out of a James Bond villain’s lair, but they’re all for the greater good: addressing basic puzzles about the universe’s existence.

Greater Sudbury’s secret treasure is Vale’s Creighton nickel mine, where 150 researchers collaborate with another 1,000 scientists from across the globe in labs two kilometers below.

The extended laboratory, as we know it now, is celebrating its tenth anniversary this year, despite the fact that several components of the laboratory area have been in use for many decades.

While SNOLAB has collaborated with academics and 46 North Brewing to create a unique beer to commemorate their tenth anniversary, the event also provides a chance to reflect on their past and future.

After all, the facility is marketed as the world’s deepest and cleanest lab, with 5,000 square meters of spotless lab space utilized for numerous studies that need the facility’s particular atmosphere.

It’s a place that helped foster neutrino research, earning Sudbury Neutrino Observatory researcher Art McDonald the Nobel Prize in physics in 2015. He shared the prize with Dr. Takaki Kajita of Japan’s Super-Kamiokande detector. Their research proved that neutrinos, which are subatomic particles, had mass.

SNOLAB is two kilometers down, off an existing Vale mine, where cosmic rays are significantly sheltered from the laboratory area.

“You may travel down two kilometers and not be touched by a single cosmic ray for an entire 40-hour workweek,” SNOLAB interim executive director Clarence Virtue said, adding that although some cosmic rays do get so far into the Earth’s crust, it’s only around 0.3 cosmic rays per metre squared every day.

In contrast, the Earth’s surface is bombarded with 50 million times more cosmic rays on a daily basis.

He defined cosmic rays as “energetic particles, protons, and photons that interact in the upper atmosphere of the planet and produce a shower of other particles as a result of the interactions they have high in the atmosphere.”

The study space at SNOLAB is positioned where it is because cosmic rays interfere with the sorts of studies that take place there.

The original wing of the facility, known as the SNO (Sudbury Neutrino Observatory), opened a few decades ago to research (as the name implies) neutrinos.

Researchers collaborated with Inco (later Vale) to establish a research facility next to an existing mining operation, taking advantage of a region where the company’s minerals were of little commercial relevance. They journey two kilometers deep in a cage with miners, a three-minute trip that Virtue claims covers the height of four CN Towers.

“The cage is actually moving,” he added, adding that it’s a one-mile hike to the research facility once they reach the necessary depth.

“The whole lab is a clean chamber, so we descend two kilometers down to get away from cosmic rays, but typical materials contain all types of natural radioactivity.”

SNOLAB currently comprises of three enormous cavities, including the original SNO space, and is celebrating its tenth anniversary this year.

There are a number of such facilities across the globe, but this is the only one in Canada and one of just two in North America. The Gran Sasso National Lab, which is now under development in Italy and is being constructed off of an existing road tunnel, is one of them.

Because cosmic rays hit the Earth from all sides, including the slopes of mountains, a laboratory underground is the best option, according to Virtue.

In comparison to us, the Laboratori Nazionali del Gran Sasso will “have 100 times the quantity of cosmic rays passing through that lab.”

These laboratories are used for a broad variety of studies, and not all of them need the finest, deepest lab. SNOLAB, on the other hand, is particularly interested in specific studies that need the finest possible environment free of cosmic rays.

The first study into neutrinos at the Sudbury Neutrino Observatory was revolutionary, confirming that neutrinos had mass and “changing our knowledge of the deepest workings of matter and becoming important to our vision of the cosmos.”

According to SNOLAB’s website, which includes a list of scientific accolades received as a consequence of their researchers’ efforts.

Neutrinos are the second-most numerous known particles, according to Virtue, and are linked to the universe’s history stretching back to the Big Bang.

“The whole universe, including ourselves, is made up of that stuff that was somehow formed during the Big Bang,” he stated, adding that “something disrupted the equilibrium between matter and antimatter at the moment of the Big Bang,” resulting in everything we see today.

Although early successes in the field of neutrinos led to a Nobel Prize and the construction of SNOLAB, a $70-million construction project, neutrinos research is still ongoing, including a more than 10-year experiment counting neutrinos that come from a supernova explosion within the Milky Way galaxy.

Although supernova explosions happen around once per second in the cosmos, they only happen three times every second in our galaxy, thus the experiment may take a while to see results. Researchers think that by studying the “astronomical quantity of neutrinos” produced by supernovas, they may understand more about their nature.

The two cavities dug out and opened ten years ago to extend the SNO facility beyond its original cavity and into the SNOLAB we know today are mostly devoted to the study of dark matter, which is still merely a theory at this point in time and has yet to be observed by any researcher.

“Persuading the world that you’ve observed dark matter, which has been postulated to exist,” Virtue added, “is practically Nobel Prize material.” “One of the greatest locations in the world to do it is here.”

He went on to say that understanding dark matter would help us comprehend the cosmos.

SNOLAB researchers have ruled out portions of parameter space so far, but they have yet to observe dark matter.

“The history to date has been literally dozens of tests ruling out areas in that two-dimensional plane,” he said, adding that despite theorists’ various hypotheses, nothing concerning dark matter has been experimentally determined.

The location has become a crucial pillar in the investigation of dark matter, with detectors sensitive to cosmic rays and SNOLAB being the finest research environment in the world free of cosmic rays.

On the neutrino front, a case is being made for an experiment at SNOLAB that is expected to cost between $300 and $400 million, with finance and politics still being worked out.

The main issue they’re trying to address is whether neutrinos are their own antiparticle or not.

Virtue said, “It’s basic knowledge, it’s fundamental science.” “It’s a far more in-depth knowledge of how the cosmos came to be, and why things are the way they are,” says the author.

SNOLAB is a working research environment

In any given moment, several experiments are underway at SNOLAB, despite the fact that the COVID-19 epidemic has reduced the amount of personnel working underground.

During a day shift, between 30 and 35 individuals are underground, however this number would normally be between 40 and 50.

The 150 employees and the 1,000 members of a user community of physicists from all over the globe, including those from more than 30 nations, are among them.

“On typical shifts, there may be anywhere from 10 to 20 users on the shift, in addition to the SNOLAB personnel,” Virtue added, “but it really depends on what’s going on beneath.”

The majority of subterranean experiments last three to five years, 24 hours a day, seven days a week, in order to achieve a result, while the next generation of testing last ten years.

It’s a one-of-a-kind facility known across the globe as a great spot to investigate neutrinos and dark matter, and it’s where Dr. Stephen Hawking, the world’s most renowned theoretical physicist, paid a visit in 2012.

While the search for funding continues, the province pledged $12 million last year to help launch their strategic plan, which includes “the vision to be the world’s leading international laboratory in deep underground science, hosting the world’s most advanced experiments that provide insight into the nature and evolution of the universe.”

Large-scale, multi-year trials are continuing, but smaller attempts with more immediate consequences are also underway, such as an endeavor to develop a basic emergency ventilator that started early in the epidemic.

“SNOLAB has had a lot of public support, and (we) want to give back,” stated Nigel Smith, the executive director at the time. “Of course, this is for the advantage of Canadians and the rest of the globe.” It would be inexcusable if we did not do all we could to help find answers to this situation.”

SNOLAB is celebrating its tenth anniversary

SNOLAB and researchers from the REPAIR collaboration have partnered up with 46 North Brewing to create a unique Cosmic Rays beer, which is available in growlers and at their tasting room on Kelly Lake Road.

The REPAIR cooperation, which is an endeavor of the Northern Ontario School of Medicine to explore the influence of low-level background radiation on living organisms, cultivated the yeast used in the brew underground at SNOLAB.

“We know that too much radiation is hazardous,” Virtue added, noting that radiation therapy, which destroys cells selectively, is used in cancer treatment.

“Is it necessary for some background amount of radiation to interfere with our genetics and biology in order for life to evolve the way it did?”

Cosmic Rays is a charity beer that donates a percentage of its earnings to the Northern Cancer Foundation.

Despite being well-known in the scientific community for its contributions to the discipline, Virtue noted that activities like these are intended to assist the general public become aware of their existence.

“It’s a bit of a Sudbury hidden treasure, and more people should be aware of it.”