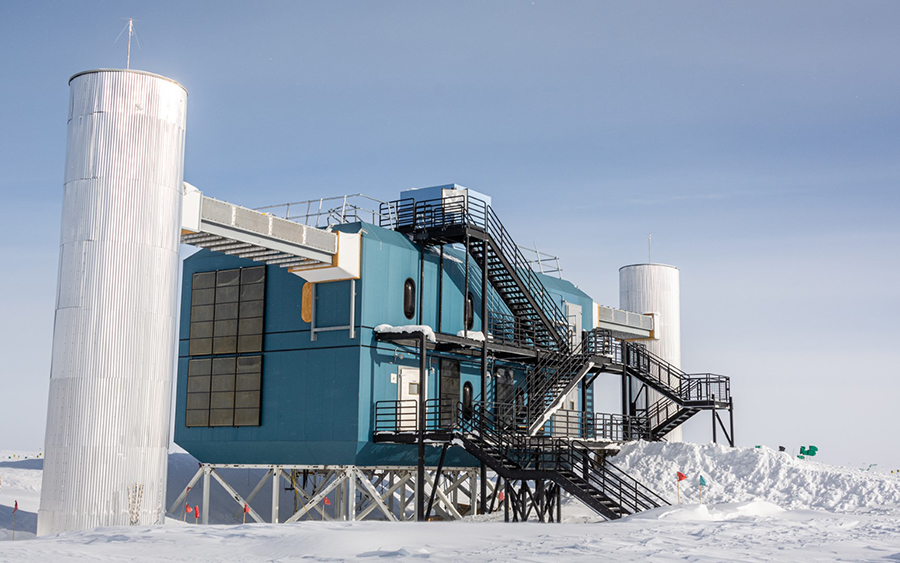 Increasing the size of a neutrino hunt in the South Pole

The IceCube detector will be upgraded in the near future, providing further information on the elusive particles

IceCube, a massive observatory dedicated to identifying ghostly subatomic particles known as neutrinos, is located under the vast, icy landscape of the South Pole. Neutrinos travel in all directions through the Earth, yet they are light, numerous, and rarely interact with their surroundings.

Like round, basketball-sized Christmas lights, the IceCube detector is made up of an array of 86 strings adorned with more than 5000 sensors. They penetrate layers of Antarctic ice that have accumulated over hundreds of millions of years, reaching depths of more than 2 kilometers (more than 1 mile).

The IceCube partnership reported in July 2019 that the US National Science Foundation has awarded it $23 million toward a $37 million renovation, with additional funding from Michigan State University, the University of Wisconsin–Madison, and German and Japanese agencies.

The upgrade will add seven more strings of sensors to the detector, as well as new ice-characterization devices. Physicists will be able to better grasp how neutrinos fluctuate between their three flavors: electron, muon, and tau as a result of this extension. Scientists also intend to take more exact measurements of IceCube’s frozen interior in order to obtain a better look at neutrinos from far beyond the galaxy.

One of the main goals of IceCube, which is led by a global team of over 300 scientists from 12 nations, is to find cosmic neutrinos. They can tell which neutrinos are from afar because they have a lot more energy when they collide with the Earth than their more nearby counterparts. Physicists seek to locate the massive cosmic accelerators that produce ultra-high energy particle beams by analyzing these extraterrestrial particles.

In 2013, IceCube made its first important discovery when it discovered two ultra-high energy neutrinos from beyond the solar system. According to Olga Botner, a physicist at Uppsala University in Sweden and former spokesperson for IceCube, these events, called Bert and Ernie, were the first of many cosmic neutrino detections.

She recalls, “We realized we were in business.” “Not only could we see the atmosphere, but we could also see neutrinos from other galaxies. That was enormous.”

Four years later, IceCube physicists discovered an extraterrestrial neutrino, prompting scientists at astronomical observatories throughout the world to search for a glimpse of its source. This global search led scientists to the particle’s birthplace: a blazar galaxy, which is a very bright galaxy. A blazar functions as a cosmic accelerator, ejecting a steady stream of particles from its center.

The origin of the vast majority of cosmic neutrinos is unknown. However, since those early discoveries, IceCube’s scientific repertory has grown. IceCube is also used by scientists to investigate how neutrinos move from one kind to another, which could aid in determining whether there are new types of neutrinos that we aren’t aware of, as well as to look for dark matter and characterize how light travels through Antarctic ice.

“We were 90% focused on discovering point sources of astrophysical neutrinos when we launched IceCube,” explains Kael Hanson, a physicist and director of WIPAC. “When we were designing the experiment, we had no clue how rich the science program would eventually become.”

On the ice, an update

More than 700 more sensors will be added to the center of IceCube as part of the upcoming upgrade, which will be distributed among seven strings.

The center of the detector is already more densely packed with strings than the remainder of the detector, making it better suited to detecting low-energy particles. The new sensors will increase the sensitivity of the system even more. “By a factor of ten, we’re lowering the energy threshold,” Hanson says.

The scientists will be able to analyse the hundreds of thousands of atmospheric neutrinos that hit the detector each year in more detail thanks to the denser core. This will allow scientists to take more precise tau neutrino measurements, which will help them better understand neutrino oscillations, notably how muon neutrinos change to tau neutrinos.

Botner explains, “We don’t understand how neutrinos might spontaneously shift from one flavor to another.” “Discrepancies between our expectations and what we see could indicate the presence of unknown neutrino types, such as the so-called sterile neutrino.”

Scientists must use a high-pressure stream of hot water to bore deep holes into the ice to introduce new strings into the detector. Scientists will use additional calibration tools like as cameras and light sources, as well as the detectors, during the upgrade to assist them characterize the ice.

The ice that forms when water refreezes around the strings (a process that might take several weeks) can contain dust and bubbles. Because of these flaws, detecting neutrinos is more challenging.

Scientists will be able to apply this new knowledge to previously acquired data as well as defining the ice will allow them to more precisely judge future observations. Dawn Williams, a particle astrophysicist at the University of Alabama, says, “In principle, we can readjust all the data and increase our ability to point back to a source.”

Drilling by the IceCube partnership is expected to begin in late 2022. Meanwhile, the team is working on the upgrade’s sensors and other components, as well as the software that will be used to drive the updated detector. In the spring of 2023, the team plans to begin gathering data.

The modification also serves another purpose: it allows scientists to test novel sensor designs that could be used in IceCube-Gen2, a proposed detector that would be ten times larger than the current one. The super-sized observatory would allow scientists to take even more exact neutrino measurements and detect more ultra-high-energy particles from space, increasing the likelihood of pinpointing their origins.