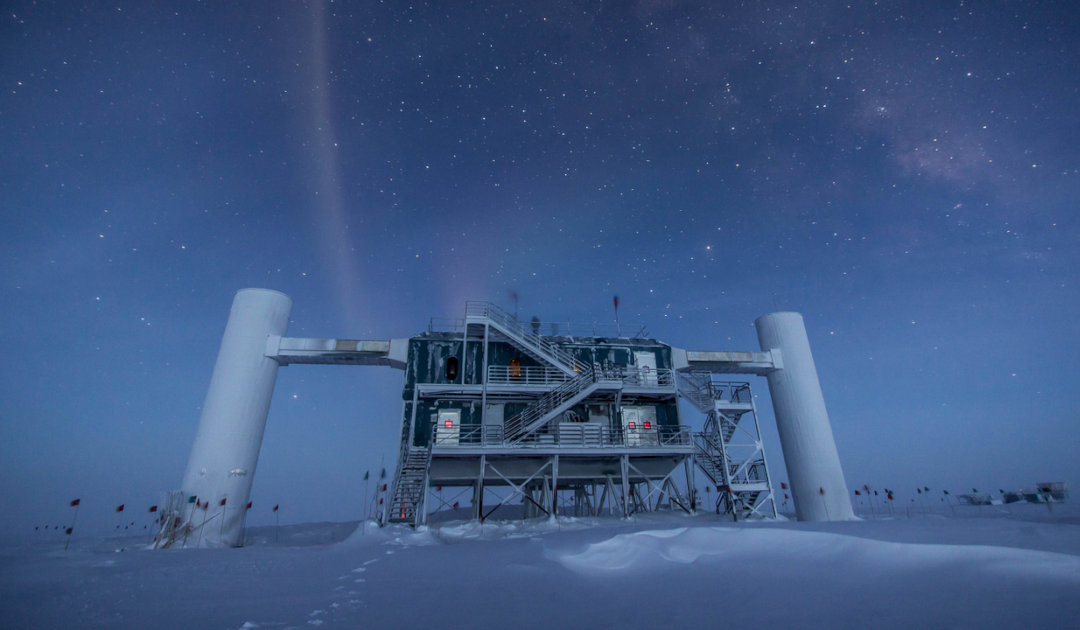 This week, geologists are drilling boreholes high on Greenland’s ice sheet. They are not, however, earth scientists looking for clues to the past climate. They are particle astrophysicists on the hunt for cosmic accelerators that produce the universe’s most energetic particles. They plan to trap elusive particles known as neutrinos at higher energy than ever before by installing hundreds of radio antennas on the ice surface and dozens of meters below it. “It’s a discovery machine, looking for the first neutrinos at these energy,” University of Chicago’s Cosmin Deaconu says from Greenland’s Summit Station.

Other detectors on Earth occasionally detect the arrival of ultra–high–energy (UHE) cosmic rays, atomic nuclei that slam into the atmosphere at such high speeds that a single particle can contain as much energy as a well-hit tennis ball. Researchers want to find out where they came from, but because the nuclei are charged, magnetic forces in space bend their courses, making it difficult to find out where they came from.

This is where neutrinos come into play. Theorists assume that once UHE cosmic rays leave their sources, they collide with photons from the cosmic microwave background, which pervades the cosmos, and produce so-called cosmogenic neutrinos. Because neutrinos are uncharged, they travel as straight as an arrow to Earth. The challenge is catching them. Because neutrinos are typically reluctant to interact with matter, trillions of them travel by you every second without being noticed. Huge amounts of material must be examined in order to detect only a few neutrinos colliding with atoms.

The IceCube Neutrino Observatory in Antarctica is the largest of its kind, monitoring for flashes of light caused by neutrinoatom collisions across 1 cubic kilometer of ice beneath the South Pole. Since 2010, IceCube has detected several deep space neutrinos, but just a few have energies approaching 10 petaelectronvolts (PeV), the predicted energy of cosmogenic neutrinos, according to Olga Botner, an IceCube team member at Uppsala University. “We need to monitor substantially greater quantities of ice to detect many neutrinos with even higher energy in an acceptable time.”

One method is to take use of another signal produced by a neutrino impact: a radio wave pulse. Because waves can penetrate up to one kilometer through ice, a widely distributed array of radio antennas near the surface can monitor a far bigger volume of ice at a lower cost than IceCube, which relies on long strings of photon detectors deep within the ice. The first coordinated effort to verify the hypothesis is the Radio Neutrino Observatory Greenland (RNO-G), led by the University of Chicago, the Free University of Brussels, and the German accelerator center DESY. It will feature 35 stations, each with two dozen antennas, covering a total area of 40 square kilometers when completed in 2023. The first station, at the US-run Summit Station at the peak of the Greenland Ice Sheet, was placed last week, and the team has moved on to the second. The terrain is harsh and brutal. “You can’t get something shipped quickly if you didn’t bring it,” Deaconu explains. “You have to work with what you’ve got.”

The cosmogenic neutrinos that the team aims to collect are thought to be emitted by furious cosmic engines. The most likely sources of energy are supermassive black holes that consume matter from their surroundings galaxies. IceCube has found two deep space neutrinos with energy lower than Bert, Ernie, and Big Bird in galaxies with huge black holes, indicating that they are on the right track. However, many more neutrinos at higher energy are required to demonstrate the connection.

In addition to determining the origins of UHE cosmic rays, researchers believe that neutrinos will reveal what those particles are made of. The constitution of two primary equipment used to detect UHE cosmic rays differs. Data from the Utah Telescope Array indicate that they are entirely protons, however data from Argentina’s Pierre Auger Observatory indicates that heavier nuclei are mixed in with the protons. The energy spectrum of the neutrinos produced by those particles should vary depending on their composition, which could provide information on how and where they are accelerated.

According to Anna Nelles of Friedrich Alexander University Erlangen-Nürnberg, one of the project leads, RNO-G may capture enough neutrinos to expose such telltale energy discrepancies. RNO-G may catch up to three cosmogenic neutrinos every year. “If we’re unlucky,” she says, detections might be so infrequent that just one would take tens of thousands of years to score.

Even if RNO-G proves to be a game of waiting, it is also a testbed for a much larger radio array, extending across 500 square kilometers, that is planned as part of an IceCube update. If there are cosmogenic neutrinos out there, the second generation IceCube will discover them and determine what they are. “It might be flooded with neutrinos at a rate of ten per hour,” Nelles explains. “However, we have to be lucky.”