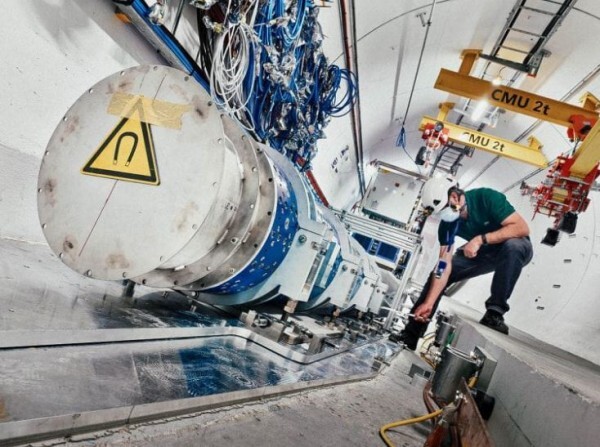 The multinational Forward Search Experiment team, lead by physicists from the University of California, Irvine, has made the first-ever detection of neutrino candidates produced by the CERN facility near Geneva, Switzerland’s Large Hadron Collider.

The researchers describe how they witnessed six neutrino interactions during a pilot run of a compact emulsion detector built at the LHC in 2018 in an article published today in the journal Physical Review D.

“No indication of neutrinos had ever been found at a particle collider before this experiment,” said co-author Jonathan Feng, UCI Distinguished Professor of physics and astronomy and FASER Collaboration co-leader. “This remarkable achievement is a step toward a better understanding of these elusive particles and their significance in the universe.”

According to him, the discovery made during the pilot provided his team with two critical pieces of information.

“First, it confirmed that the LHC’s position forward of the ATLAS interaction point is the correct place for detecting collider neutrinos,” Feng explained. “Second, we showed that employing an emulsion detector to see these types of neutrino interactions is effective.”

At the Large Hadron Collider, the FASER experiment is located 480 meters from the ATLAS contact point. This is an excellent position for detecting neutrinos that emerge from particle collisions at the facility, according to Jonathan Feng, UCI Distinguished Professor of Physics and Astronomy and co-leader of the FASER Collaboration.

Lead and tungsten plates alternated with layers of emulsion in the pilot instrument. Some of the neutrinos created at the LHC collide with nuclei in dense metals, resulting in particles that pass through the emulsion layers and leave markings that are visible after processing. The energy of the particles, their flavors – tau, muon, or electron – and whether they’re neutrinos or antineutrinos – are all revealed by these etchings.

The emulsion, according to Feng, works in a similar way to photography in the pre-digital camera period. Photons leave tracks on 35-millimeter film when exposed to light, which are revealed as patterns after the film is developed. After removing and developing the detector’s emulsion layers, the FASER researchers were able to see neutrino interactions as well.

“Now that the FASER team has confirmed the effectiveness of the emulsion detector approach for observing the interactions of neutrinos produced at a particle collider,” Feng said, “the FASER team is preparing a new series of experiments with a full instrument that is much larger and significantly more sensitive.”

Since 2019, he and his colleagues have been preparing to undertake a dark matter experiment at the LHC using FASER equipment. They hope to find dark photons, which would provide a first look at how dark matter interacts with ordinary atoms and other stuff in the cosmos via nongravitational forces.

The FASER team, which consists of 76 physicists from 21 universities in nine countries, is merging a new emulsion detector with the FASER equipment, thanks to the success of their neutrino work in recent years. The FASERnu equipment will weigh more than 2,400 pounds and will be significantly more reactive and capable of distinguishing between neutrino kinds than the pilot detector, which weighed around 64 pounds.

“We hope to be able to record more than 10,000 neutrino interactions in the next run of the LHC, beginning in 2022, given the power of our new detector and its prime location at CERN,” said co-author David Casper, FASER project co-leader and associate professor of physics and astronomy at UCI. “The highest-energy neutrinos ever produced from a human-made source will be detected.”

See also  IN NEUTRINO OSCILLATIONS, THERE IS A MATTER-ANTIMATTER DIFFERENCE

FASERnu will be able to observe all three flavors of neutrinos, as well as their antineutrino counterparts, he said, whereas other experiments have only been able to discriminate between one or two types of neutrinos. Casper estimates that just approximately 10 tau neutrinos have been observed in human history, but that his team will be able to double or triple that number in the next three years.

“This is an exceptionally great tie-in to the tradition at the physics department here at UCI,” Feng said, “because it’s continuing on with the legacy of Frederick Reines, a UCI founding faculty member who was the first to discover neutrinos and received the Nobel Prize in physics.”

“In record time and with highly unconventional sources, we’ve developed a world-class experiment at the world’s premier particle physics laboratory,” Casper said. “We owe the Heising-Simons Foundation and the Simons Foundation, as well as the Japan Society for the Promotion of Science and CERN, an enormous debt of gratitude for their great support.”

The University of California, Irvine is located in Irvine, California. UCI is the newest member of the prestigious Association of American Colleges, having been founded in 1965. It is listed in the top 10 public universities in the United States by U.S. News & World Report. The campus is noted for its academic accomplishment, premier research, innovation, and anteater mascot, and has produced three Nobel laureates. UCI has almost 36,000 students and offers 224 degree programs, led by Chancellor Howard Gillman. It is Orange County’s largest employer, contributing $7 billion annually to the local economy and $8 billion statewide. It is located in one of the world’s safest and most economically thriving regions.