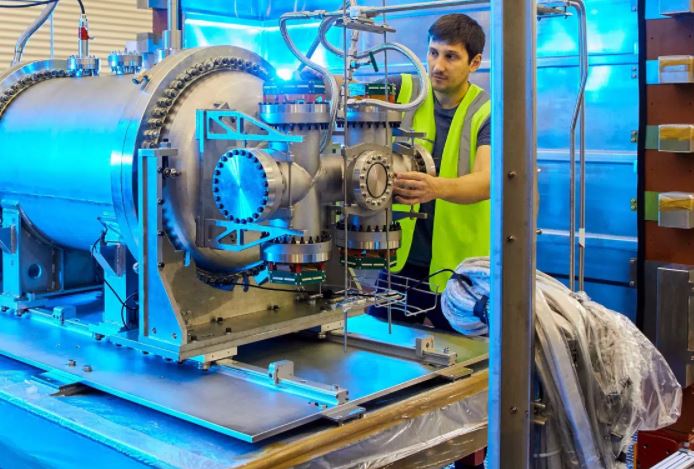 The grant will allow him to develop the project called GanESS (Gaseous detectors for neutrino physics at the ESS) over the next four years.

Francesc Monrabal, an Ikerbasque researcher at the Donostia International Physics Center (DIPC), has obtained the prestigious ERC Starting Grant awarded by the European Research Council to the most brilliant young scientists to launch and develop their own innovative lines of research at the frontier of knowledge.

The grant awarded to Francesc Monrabal is endowed with 1.5 million euros and will allow him to develop during the next four years the project called GanESS (Gaseous detectors for neutrino physics at the ESS). The main objective of the project is the creation of a new neutrino detector that will later be installed at the European Spallation Source (ESS) in Lund (Sweden), which is currently under construction.
under construction.

The GanESS project had previously been supported by the Basque Government’s Department of Education and is also one of the core projects of the Department’s IKUR strategy in Neutrionics, which encompasses research in both the neutron and neutrino fields. The Basque Government’s IKUR initiative aims to promote science of excellence in scientific areas that are considered a priority, with the ultimate goal of creating wealth in the productive system.

The architect of the project, Francesc Monrabal, is an experimental physicist with a prolific career in the world of particle detectors and more specifically in the detection of neutrinos.

Neutrinos are one of the most special elementary particles known. Their mass is almost zero and they have no electric charge, so they hardly interact with anything in their environment, and because of these same characteristics, it is very difficult to detect them and therefore to study them.

In Monrabal’s words, “to get an idea of how difficult it is to detect them, it is enough to know that about 100 million neutrinos per square centimeter and per second are passing through our body, and yet not a single one of them will interact with us during our lifetime”.