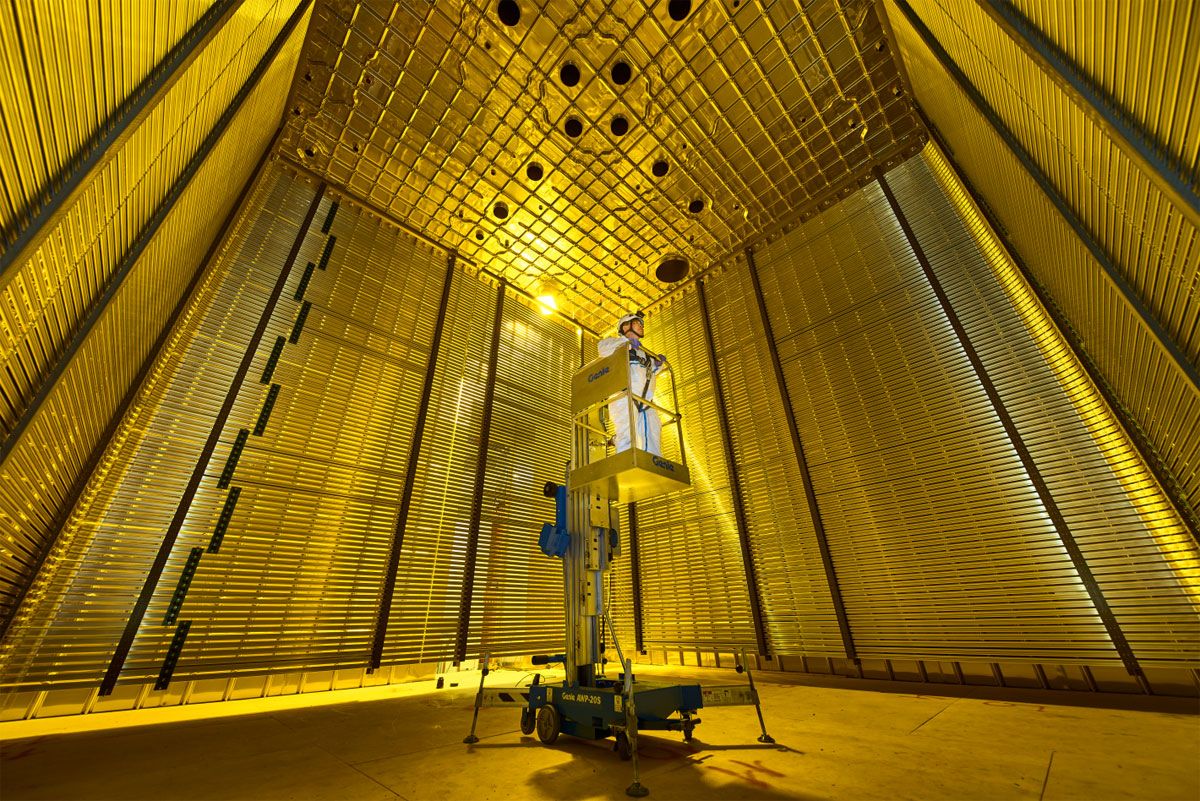 With a bang, DUNE advances to the next stage

The Long-Baseline Neutrino Facility, which will supply space, equipment, and a particle beam for the multinational Deep Subterranean Neutrino Experiment, has seen its first underground blasting.

It all began with a bang

The explosion marks the beginning of underground excavation work for the DUNE experiment and the Long-Baseline Neutrino Facility, or LBNF, which powers and shelters it.

DUNE’s huge particle detector will observe the behavior of ephemeral particles called neutrinos, which will be buried a mile underground in South Dakota rock at the Sanford Underground Research Facility. Workers will blast and drill to remove 800,000 tons of rock over the next three years to create room for the massive detector and its support systems.

“The start of underground blasting for these early excavation activities not only marks the start of the next major phase of this work, but also significant progress on the construction already underway to prepare the site for the experiment,” says Chris Mossey, Fermilab Deputy Director for LBNF/DUNE-US.

The excavation process begins with the removal of 3000 tons of rock from a depth of 3650 feet. This first step creates a station for a large drill with a bore the width of a vehicle and a length of nearly four meters.

The equipment will assist with the construction of a 1200-foot ventilation tunnel that will lead to the considerably bigger cavern where the DUNE particle detector and accompanying infrastructure will be installed. The LBNF project will extract hundreds of thousands of tons of rock, nearly the weight of eight aircraft carriers, 4850 feet below the surface—roughly 1.5 kilometers deep.

DUNE’s massive and sophisticated detector, a neutrino hunter seeking for interactions from one of the universe’s most elusive particles, will gradually fill the empty area. Researchers will send a strong beam of neutrinos right through the earth, no tunnel required, from Fermilab in Illinois to the subterranean detector in South Dakota, and monitor how the particles change their identities. What they discover could help to explain one of physics’ most perplexing questions: why does matter exist instead of nothing at all?

“The global particle physics community is preparing in various ways for the day DUNE goes online, and this week we take the material step of excavating rock to support the detector,” says University of Manchester DUNE co-spokesperson Stefan Söldner-Rembold. “It’s a fantastic example of collaboration: as excavations are taking place in South Dakota, DUNE partners all over the world are designing and manufacturing pieces for the DUNE detector.”

Sanford Underground Research Facility already collects data for a number of science studies, however there is no activity at the 3650 level. The initial excavating stage to build the tunnel for the drill takes place in an isolated area, with nothing and no one around. Before moving on to the larger excavation at the 4850 level, where the experiment will be erected, the LBNF construction project will gather information regarding things like air movement and the rock’s unique response to the drill-and-blast approach.

According to Fermilab Long-Baseline Neutrino Facility Far-Site Conventional Facilities Manager Joshua Willhite, “it was critical for us to establish a plan that would allow the LBNF excavation to proceed without affecting the experiments already underway in other portions of the 4850 level.” The project will begin excavation at the 4850 level after a period of excavation at the 3650 level.

See also  New Evidence in the Search for a Fourth Type of Neutrino, which has been ongoing for decades

Every ounce of the 800,000 tons of rock displaced by the subsurface drill-and-blast operation must be carried a mile to the surface. A conveyor is being constructed there to deliver the crushed rock across a 4200-foot span to the Open Cut, a massive open pit mining region excavated in the 1980s. Despite the size of the LBNF excavation, the rock brought to the surface and deposited in the Open Cut will only fill about 1% of it.

Excavation at the 3650 level will be finished in the next months, with blasting at the 4850 level to begin shortly after.