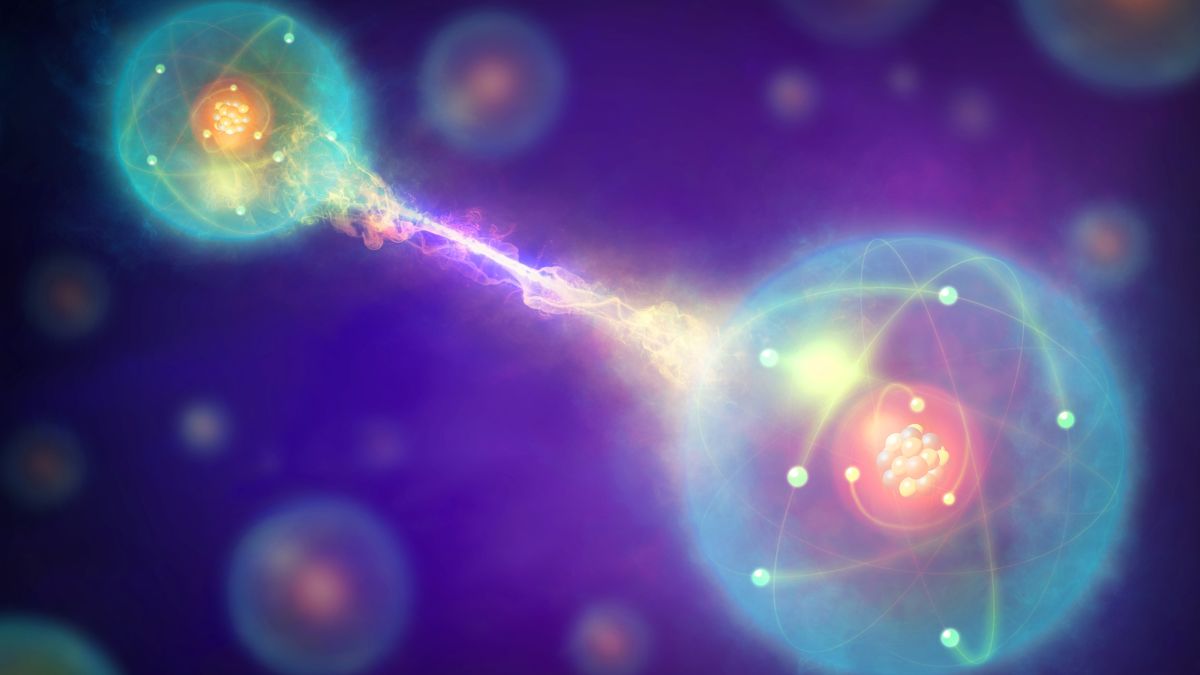 The interaction of microscopic glass spheres hanging in a vacuum has been studied by physicists at close range. Now that the “levitating” nanoparticles have been handled precisely enough, new avenues for exploring the perplexing borderland between our familiar reality and the paradoxical quantum physics that governs atomic-scale things are available.

A physicist at the Swiss Federal Institute of Technology (ETH) in Zurich named Romain Quidant says, “This is unquestionably a significant milestone that opens up new opportunities.” The findings were released on August 25. One day, levitating particles might serve as a foundation for quantum computing or open the door to incredibly sensitive measuring equipment. In the past ten years, physicists have developed a number of methods for controlling objects as small as virus particles, which are a few hundred nanometers wide, in a vacuum, particularly by employing the gentle pressure of laser light.

The physics community was shocked in 2020 when Uro Deli at the University of Vienna and his associates slowed particle centers of mass to what is known as the quantum ground state, making it appear as though the particles were as cold as they could be. The first step towards accessing and controlling quantum behavior, which is typically only possible at subatomic scales, is to reach the ground state, which necessitates cooling items to very low temperatures. The particles continued to be heated, thermally vibrate, and rotate on themselves even while their centers of mass were in the ground state.

The community was ecstatic when senior author of that work Markus Aspelmeyer of the University of Vienna disclosed the quantum ground state at a conference and then submitted a preprint on the arXiv service, according to physicist Lia Li. Li, the chief executive of the engineering firm Zero Point Motion in Bristol, UK, claims that “people were agitated.” Some of the laboratories that tried to duplicate the findings were successful.

Giorgio Gratta of Stanford University in California is one physicist who works with slightly larger particles that are at least one micrometer broad and have enough mass to exert a noticeable gravitational force. The main goal, according to him, is to look for novel microscale interactions or departures from Newtonian gravity.

The initial step toward juggling numerous levitated particles was made in the most recent study by Deli, Aspelmeyer, and their partners. They split a laser beam in half by reflecting it off a liquid crystal panel within a vacuum chamber. They then utilized an ultrasonic nebulizer, like to those used to treat asthma, to inject 200 nanometer-wide glass spheres into the chamber until one was trapped in the focal point of each of the two laser beams.

Because of how quickly the electric fields of the laser oscillate, this “optical levitation” technique causes electric charges to appear equally quickly at each nanosphere’s opposing ends, much like the poles of a bar magnet. This polarization produces a force that pulls the particles in the direction of the light’s focal point, which in this case is where the light is most intense.

According to co-author Benjamin Stickler, a theoretical physicist at the University of Duisburg-Essen in Duisburg, Germany, as the polarization rapidly flips back and forth, it behaves like the electric current inside an antenna that emits electromagnetic waves. “This emits radiation as you have accelerated charges.” The researchers were able to move the two focal points closer together by altering the liquid-crystal panels. The particles started to detect one other’s signals at a few micrometers apart, and the researchers were able to get them to vibrate together like weights connected by springs.

The team’s ability to turn off the force that one particle applied to the other without also turning off the opposing force from the second particle was made possible by tuning the laser. This led to the creation of ‘fabricated’ laws of physics that appeared to defy Isaac Newton’s third law, according to which there must be an equal and opposite reaction to every action.

The next step will be to use the laser light to chill both particles to their quantum ground states, according to Stickler. At that time, it would be conceivable to enter a state of quantum entanglement in which certain of the particles’ observable properties, in this case, their locations, are more tightly associated than would be permitted by the rules of classical, non-quantum physics.

The hallmark of quantum behavior, which is typically only seen at subatomic sizes, is entanglement. Since the beginning of time, physicists have argued over whether macroscopic things are subject to a unique set of rules or whether quantum phenomena are simply too difficult to perceive at those scales. This subject is being investigated by several experimental projects that show quantum behavior at ever-larger sizes. The first time this had been done for macroscopic items was when two teams separately entangled pairs of micrometer-scale drums last year.

But according to experts, these “clamped” objects have drawbacks because they are physically attached to a machine, making it challenging to prevent sensitive quantum states from being disturbed. In light of this, Peter Zoller and colleagues at the University of Innsbruck in Austria originally conceived the idea of employing levitated nanoparticles for quantum experiments in 20103–5. You could even imagine a nanoparticle as a tiny computer that you could manipulate with laser light, claims Zoller.

Stickler continues, another benefit of the levitation method is that it ought to function just as well for catching more than two particles. Zoller concurs. It can be scaled up to a much bigger number right away, he claims. Levitation and laser cooling have been “like a secret sauce in quantum computing” when used on single atoms or ions, according to Zoller. Nanoparticles could experience the same thing.