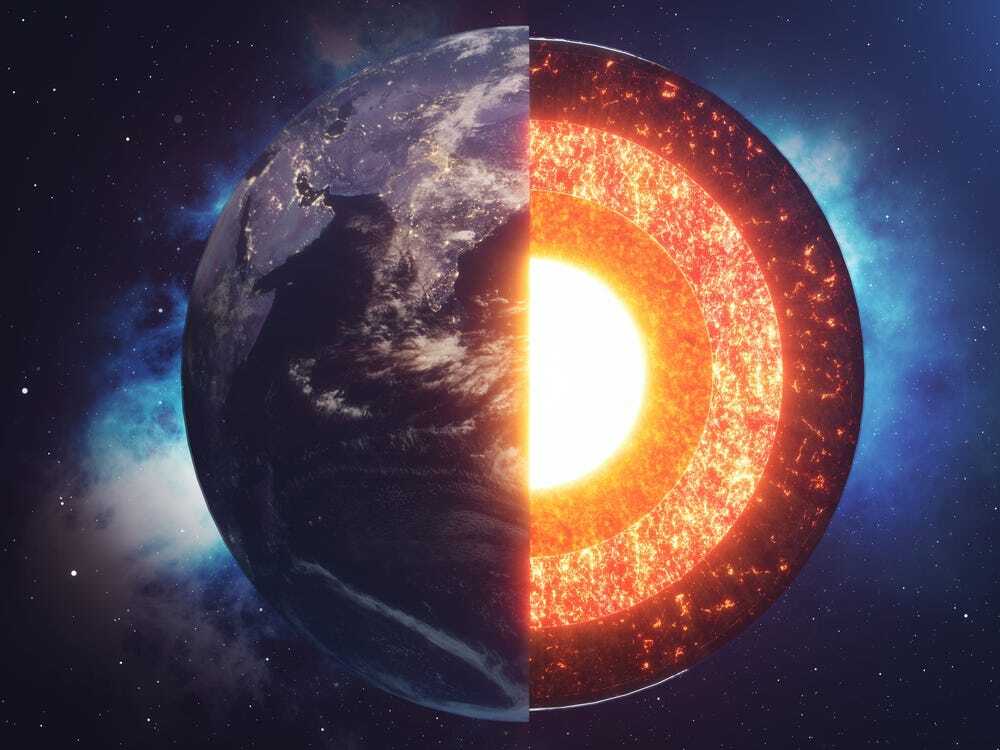 The journey begins at the Earth’s core

Many of us fantasized as youngsters about digging a hole deep enough to reach the Earth’s core, or even all the way to the opposite side of the world. Taking such a voyage is a piece of cake for neutrinos, which are subatomic particles that can readily travel through most stuff.

Geoneutrinos, or neutrinos that naturally stream from the Earth’s interior, are providing scientists with the most direct evidence of what’s going on inside the planet’s core. Geoneutrinos are radioactive isotopes released by naturally occurring radioactive isotopes inside the Earth that carry information about what makes the Earth’s interiors hot, what elements make up our planet’s core, and in what concentration and distribution, how the Earth’s mantle and tectonic plates move and interact, and how planets like ours form and evolve.

The use of geoneutrinos as tracers for the inner Earth’s chemistry, heat energy, and associated physics was first postulated in the 1960s, but it wasn’t until 2005 that these ghostly particles were really discovered.

Geoneutrino research, according to Giorgio Gratta, a physicist at Stanford University, has fast made an impact in geology and geophysics.

“This is the first time neutrino physics has been used in practice. It’s surprising that neutrinos have already found a use, and the time [it took] to find this application was actually rather short,” he says.

A better picture of the Earth’s interior
The Earth’s outer crust is made up of numerous layers that extend from the solid mantle to the liquid outer core and solid inner core. Seismic waves, electromagnetic and gravitational fields, meteorites, the contents of volcanic eruptions, and geothermal heat escaping from boreholes have all been used to discover these layers in the past. They also undertake tests in the lab to simulate the pressures and temperatures that are thought to occur in the planet’s mantle and core.

Geochemists have developed models that characterize the concentration of heat-producing materials in the interior Earth, such as radioactive uranium, thorium, and potassium, using these methods. They estimate that the Earth’s interior releases roughly 44 trillion to 46 trillion watts of total heat energy, with radioactive decay accounting for at least half of it. The majority of the remaining thermal energy is assumed to come from leftover heat from the planet’s formation, which is emitted by the Earth’s cooling mantle and core.

However, deducing everything that happens deep under the Earth—a region scientists can’t visit—is incredibly challenging, and there are still a lot of unknowns.

Geoneutrinos fit into this picture, providing the most direct observations of the planet’s innards to date. Scientists gain a new perspective on what’s going on down below by investigating particles that emerge from nuclear decay within the globe.

Geoneutrino measurements are already assisting in determining how much radioactive decay contributes to the entire heat budget of the globe. Geoneutrinos can also help scientists understand how Earth’s inner layers interact in processes like subduction, which occurs when one plate slides beneath another, and convection, which occurs when magma pushes up through the crust and forms new crust. Research is likely to improve simulations of how our planet evolved and is evolving in the future.

Wim van Westrenen, a professor of planetary evolution at VU University Amsterdam in the Netherlands, says that “at the moment, geoneutrino detection is the best way to give us the information we need” about the Earth’s heating activity.

The hunt for geoneutrinos is on
Geoneutrinos are difficult experimental subjects, yet they can give crucial data on the inner Earth.

Increasing the size of the net
Scientists will need to catch a lot more geoneutrinos to understand everything we can about the Earth’s interior. They’ll need bigger, better detectors in better locations to do so.

Gratta advises, “You need to acquire additional data.” “It would be a big improvement if KamLAND were ten times larger, and the same for Borexino. At that time, you may dismantle several geological models. Much bigger numbers will undoubtedly be beneficial.”

SNO+ (pronounced “snow-plus”), a new experiment set to start later this year in Ontario, Canada, will take a step in that direction. SNO, its forerunner, captured neutrinos as they traveled through a 1000-ton tank of heavy water.

By replacing water with linear alkyl benzene, a solvent that allows for more sensitive measurements, SNO+ will be able to detect geoneutrinos with lower energy than its predecessor, on par with KamLAND’s sensitivity. Researchers estimate SNO+ to detect around one-third more geoneutrinos per year than KamLAND, which detects a mix of neutrinos from the continental and oceanic crusts, due to its location in the midst of a continental plate rich in uranium and thorium. SNO+ is also projected to pick about 75 percent fewer anti-neutrin signals from man-made reactors than KamLAND. SNO+ detectors may be upgraded in the future to improve their sensitivity to measure lower-energy particles.

Option 1: Thin-crust pizza
The ideal geoneutrino experiment, on the other hand, would take place in a more exotic area in the long run. “You want to go somewhere with a thin crust,” Gratta explains.

Placing detectors in shallow areas improves scientists’ chances of discovering geoneutrinos that originate below the crust, in the mantle—a location about which researchers know very little.

According to Jelena Maricic, assistant professor of physics at the University of Hawaii, the crust created 75 to 80 percent of the geoneutrinos discovered thus far. So there’s still a lot to learn about what’s going on below.

Hanohano is a proposed experiment that would send a detector to the thinnest part of the Earth’s crust: beneath the sea. There would be a second advantage to a study of geoneutrinos from the Earth’s mantle there. Four kilometers of water would hide the experiment from other particles, which could cause the neutrino signals to become distorted.

“The main line is that because these studies sample different sections of the Earth’s crust, we need data from all of them,” Maricic explains. “Like jigsaw pieces, they can only give us a more refined, sharper view of the uranium and thorium distribution inside our planet, as well as finer details of heat movement and plate tectonics, if we put them all together.”

According to Maricic, the potential benefit of geoneutrino research covers subjects such as Earth sciences, cosmology, and particle physics—not to mention geology.

‘Renaissance’ is a geoneutrino
Norm Sleep, a geophysicist at Stanford, presents a simple comparison to convey the geoneutrino research challenge. If you’re looking for gold and there’s just one nugget in every ton you excavate, he says, you’ll have to sample a lot of the rock to figure it out. Otherwise, you can strike it rich in the first shovelful and believe that a mound of largely pebbles is full of gold.

Geoneutrino research, however, necessitates a diverse set of data in order to determine the true concentration and distribution of radioactive isotopes in the Earth’s crust and mantle.

Geoneutrinos, according to Sleep, may one day be used as an early warning system. While the data is unlikely to predict when the next earthquake will strike, it may assist pinpoint where it will strike: in areas where the continents are weak or where there is a minor increase in heat movement.

Sleep explains, “The heat in the Earth acts slowly.” “Because it takes a long time for radioactivity to heat up, it won’t likely tell us whether an earthquake will occur on Tuesday or Thursday. However, it may provide us with a better picture of where continents are weak.

Maricic agrees: “It was virtually a Renaissance” when geologists understood the possibilities of geoneutrinos study, she says. “Neutrino geophysics is a term that just existed seven or eight years ago. It took some time for geologists to notice, but once they did, they were ecstatic.”