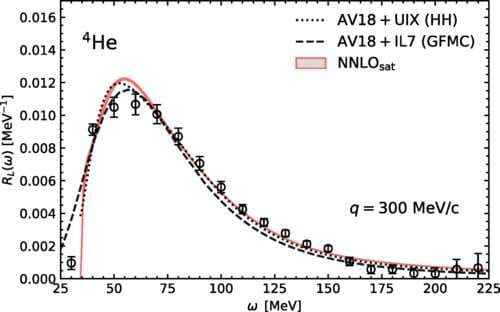 A team from the Johannes Gutenberg University in Mainz’s PRISMA+ cluster of excellence has successfully computed how atomic nuclei of the Calcium element behave in collisions with electrons. The results match the existing experimental data quite well. For the first time, tests for a nucleus as heavy as Calcium may be accurately described using a calculation based on a basic theory. The potential for such computations to be used to interpret neutrino investigations in the future is particularly interesting. In its current volume, the prestigious journal Physical Review Letters reports on the achievement of a major milestone.

The new paper was co-authored by a team led by Prof. Sonia Bacca, Professor of Theoretical Nuclear Physics in the PRISMA+ cluster of excellence, and Oak Ridge National Laboratory. Bacca has had a lot of success predicting the characteristics of atomic nuclei by deriving them from the interactions between their constituents, the nucleons, which can be explained using chiral effective field theory. Her study attempts to establish a strong link between experimental findings and quantum chromodynamics’ underlying theory. A process like this is known as an ab initio calculation in physics.

Within the same theory, cross sections of atomic nuclei probed by external fields, such as interactions with electrons or other particles, may be explained. For example, in neutrino physics, which is a major focus of the PRISMA+ research program, this approach is critical for understanding existing data and interpreting future studies.

Neutrinos are enigmatic particles that continually penetrate our planet yet are extremely difficult to detect and comprehend. Scientists aim to explore their fundamental features, such as the process in which one type of neutrino transforms into another — termed neutrino oscillation in technical language — with new planned experiments, such as the DUNE experiment in the United States. They’ll need crucial data from theoretical computations to do this. The pertinent question is: How do neutrinos interact with the detector’s atomic nuclei?

Because experimental evidence on the scattering of neutrinos on atomic nuclei is few, the study team first looked at the scattering of another lepton, the electron, for which there exist experimental data. “Calcium 40 is our test system,” says Dr. Joanna Sobczyk, a postdoc at Mainz and the study’s first author. “We were able to compute very accurately what happens with electron scattering and how the Calcium atomic nucleus behaves using our novel ab initio approach.”

This is a huge achievement: such calculations for a heavy element like Calcium, which has 40 nucleons, were previously impossible. “We are extremely delighted that we have essentially demonstrated that our technique works reliably,” Sonia Bacca adds. “A new age has begun, in which ab initio techniques may be used to explain the scattering of leptons—such as electrons and neutrinos—on nuclei, even for nuclei with 40 nucleons.”

“One of the best aspects of our method is that it allows us to precisely estimate the uncertainties in our calculations. Uncertainty quantification takes a long time, but it’s crucial for properly comparing theory to experiment “Dr. Bijaya Acharya, a PRISMA+ postdoc and research co-author, says.

The study team intends to investigate into the element Argon and its interaction with neutrinos in the future after demonstrating the promise of their technique for Calcium. Argon will be a significant target in the next DUNE experiment.