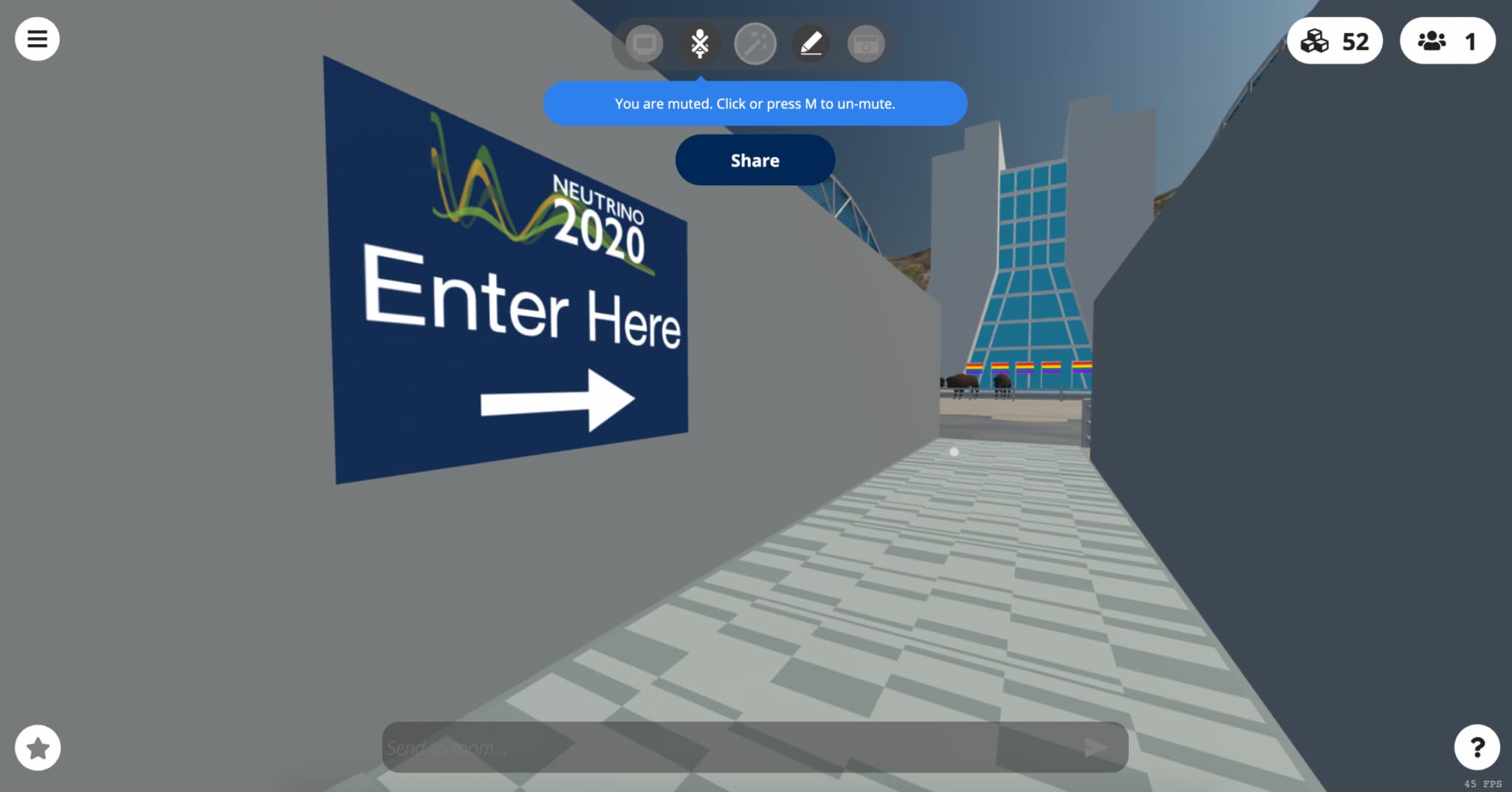 For Neutrino 2020, about 3000 scientists will gathering online

When participants are spread across the world, a dash of virtual reality helps to simulate the spontaneous interactions of an in-person conference.

Poster presentations in physics are a heady mix of research, networking, and robots. That final one isn’t as prevalent at physical science conferences, but it was a common sight at the just finished Neutrino 2020 conference, when virtual reality poster presentations hosted thousands of robotic avatars belonging to particle physicists from all around the world. Others wore panda suits, uploaded homemade skins with enormous human heads or particle tracks, or, in one case, transformed themselves into a jar of Jif peanut butter as they wandered through the virtual environment.

Diana Parno, a physicist at Carnegie Mellon University who spoke in one of the virtual poster sessions, says, “It’s both more bizarre and more enjoyable than I expected.” “And one of the good things about poster sessions is getting to meet new individuals and colleagues and make introductions—which we were still able to do.”

The International Conference on Neutrino Physics, now in its 29th year, is the world’s largest gathering of neutrino physicists. This year’s conference was co-hosted by the Department of Energy’s Fermilab and the University of Minnesota, and it was held entirely online for the first time. The conference benefited greatly from the modification. More than 3400 people from 67 countries across all seven continents tuned in to the 79 talks, which was more than four times the usual attendance. (Nearly half of those in attendance were in their early professional stages, identifying as undergraduate or graduate students.) Instead of full days of presentations, half-days were spaced out over two weeks, allowing attendees in different time zones to participate more actively. Because the event was held virtually, some people with financial constraints, travel restrictions, or duties at home or at work were able to participate.

The choice to relocate the event online two months prior to the event posed additional complications. The conference organizers had to quickly shift one of the most valuable aspects of the event: networking, serendipitous contacts, and other involvement that occurs outside of the scheduled talks. Virtual reality poster presentations were created to address this issue.

“What we really wanted from this platform is a means for individuals to connect with each other as if they were in person,” says Marco Del Tutto, a Fermilab physicist who designed the virtual poster sessions using Mozilla Hubs open source software. “It’s difficult to know if this will work unless you try it. When I went to a poster session and watched someone presenting their poster to a crowd or striding around a room and colliding with people, it made me proud.”

Presenters displayed 532 posters in 30 distinct virtual reality rooms over the course of four sessions. (A webpage also had a standard set of posters and brief films from the presenters.) While in-person posters are normally shown in a single location, distributing the posters among virtual rooms provided more space for avatars while also reducing the amount of bandwidth required to run each interactive area. It also allowed Del Tutto the opportunity to throw in a neutrino twist. Fermilab’s famous bison and Wilson Hall served as the backdrop for accelerator neutrinos, a nuclear power plant served as the backdrop for reactor neutrinos, a gigantic sun hung low in the sky for solar neutrinos, and an exploding star served as the backdrop for supernova neutrinos. Tables, couches, and cookies were strewn about to complete the conference atmosphere.

Participants could converse in real time while their avatars’ heads bobbed around. Headphones with directional sound offered users a sense of where different people were in the room, allowing them to stumble into discussions. As one walked around, one overheard all the usual topics of discussion at a physics conference—results, experimental status, careers, life updates—as well as discussion of the peculiarities of the virtual environment—the digital bison standing nearby, how to make your avatar wear a tuxedo, the underlying technology, and the inevitable glitch here and there.

Kate Scholberg, a neutrino physicist at Duke University and a member of the conference’s International Advisory Committee, says, “It’s certainly the kind of thing that will grow better and better.” She also collected roughly 20 members of the COHERENT cooperation in Grant Park for an avatar group portrait. “It’s unique, and I think it’s been a lot of fun. I’ve been having talks with folks, and many of the in-person components are replicated.”

Del Tutto and the organizers also created up social spaces for academics to congregate and chat, as well as virtual tours of Fermilab and downtown Chicago places.

“The other part of a conference is an opportunity to visit the city with your colleagues, get to know them better, and develop your working relationship with them,” Del Tutto explains.

Virtual reality was not, of course, the only way to communicate with coworkers. Participants also communicated via a special Neutrino 2020 Slack account. Organizers set up channels for certain subsets of neutrino research (such as sterile neutrinos or long-baseline neutrinos) where participants may ask the presenters questions and debate ideas from the sessions. There were also channels dedicated to issues including the future of conferences, posters, organizer assistance, virtual reality, and career possibilities. During the two-week conference, the Neutrino 2020 Slack received approximately 23,000 messages.

Tanaz Mohayai, a Fermilab neutrino physicist and the webpage lead for Neutrino 2020, says, “We had to adjust our plans rapidly and seek creative options for making the conference as engaging as possible.” “It’s been fantastic to witness the excitement surrounding the most recent achievements in our field, as well as the numerous relevant conversations going place on Slack and in the virtual poster sessions.”

Many attendees expect to see Neutrino 2020’s virtual reality and chat elements repeated in future online physics conferences, but that may not be the end of it. As conferences return to having an in-person component, the best of what works from the online world has the potential to be preserved. A hybrid conference may be imagined, with participants from all over the world, virtual interactions, and more discussion via chat. And maybe, just maybe, there will be people costumed as robots—or a jar of peanut butter—walking around the poster sessions.

The Neutrino 2020 website will continue to provide the poster portal, as well as videos and recordings of plenary talks.