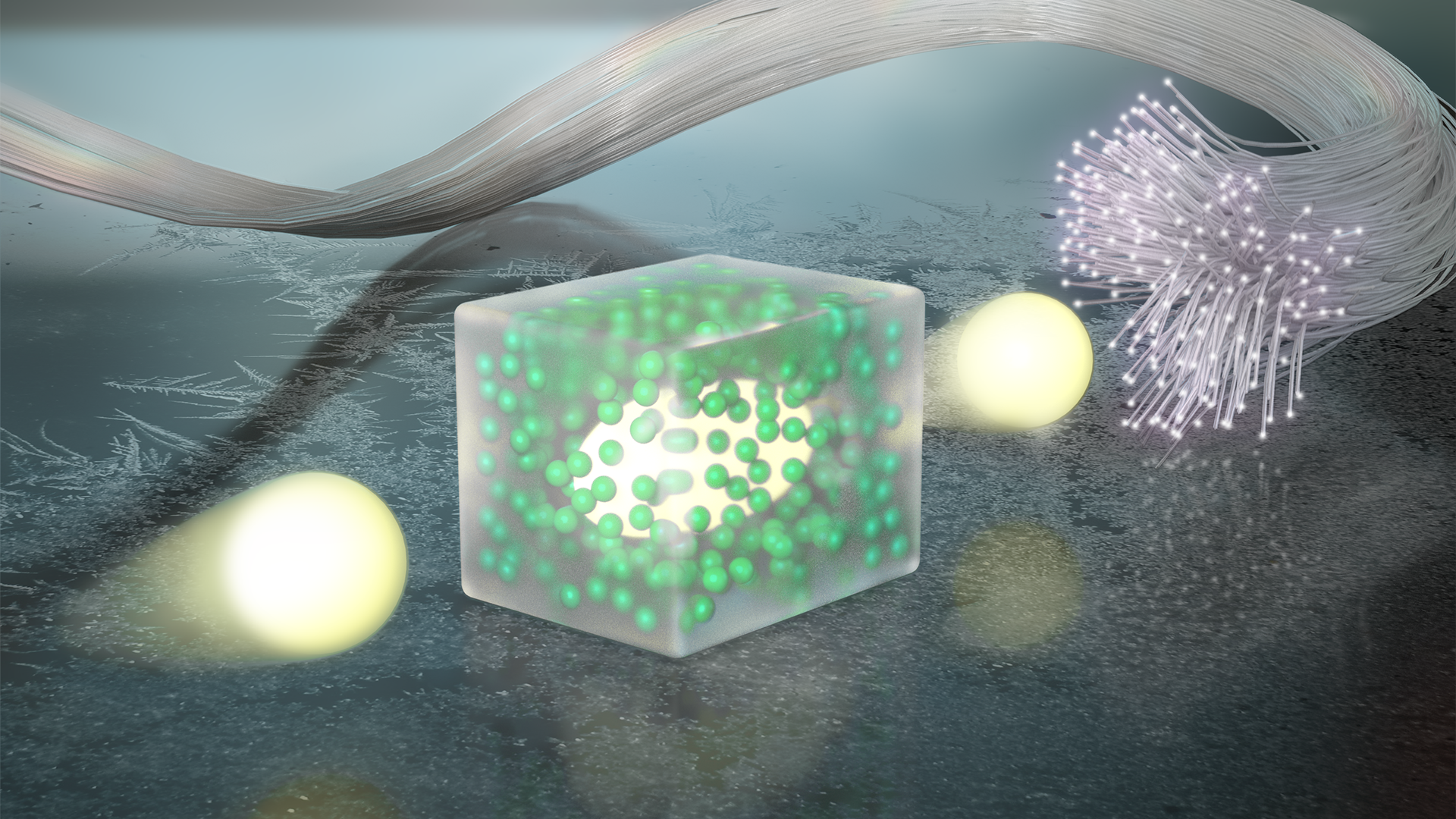 Two quantum memories have been coupled across a 33-kilometer-long fiber optic link — a record and a significant step toward the quantum internet.

A network in which data transfer is impenetrable by hackers? With the aid of the quantum mechanical phenomena known as entanglement, researchers predict that this will one day become a reality. The rule for entangled particles is that if you measure the state of one particle, you immediately know the state of the other particle. It makes no difference how close or far apart the entangled particles are. This is the optimal circumstance for delivering information across great distances in a manner that makes eavesdropping impossible.

A team of physicists led by Prof. Harald Weinfurter of LMU and Prof. Christoph Becher of Saarland University have successfully connected two atomic quantum memories over a 33-kilometer-long fiber optic link. This is the farthest distance anyone has ever managed to entangle a telecom fiber across. For quantum mechanical entanglement to take place, photons must be produced by both quantum memories. When scientists changed the wavelength of the created light particles to one used in ordinary communications, they took a giant stride forward. Weinfurter explains, “By doing so, we were able to drastically minimize photon loss and establish entangled quantum memories even over lengthy fiber optic cable distances.”

Quantum networks often consist of nodes of discrete quantum memories, such as atoms, ions, or crystal lattice defects. Quantum states can be received, stored, and transmitted by these nodes. Using light particles that are transferred either over the air or via a targeted fiber optic link, mediation between the nodes is possible. Two LMU laboratories employ optically trapped rubidium atoms for study. The 700-meter optical fibre goes below Geschwister Scholl Square in front of the main building of the university to connect the two locations. Longer distance links of up to 33 kilometers are possible when additional fibers are linked to coils.

When excited by a laser pulse, molecules return to their ground state naturally, when they emit a photon individually. Atomic spin is connected to the polarization of the photon it emits because of the conservation of angular momentum. These light particles can then be employed to couple the two atoms via quantum mechanics. To do this, the photons were transported over a fiber optic cable to a reception station, where a combined measurement of the photons reveals quantum memory entanglement.

The experiment is a significant step toward the development of a quantum internet with current fiber optic infrastructure. However, the majority of quantum memory produce light with visible or near-infrared wavelengths. Christoph Becher shows that with fiber optics, these photons travel just a few kilometers before they are lost. Therefore, the Saarbrücken physicist and his colleagues tuned the photons’ wavelength for their travel through the wire. They extended the initial wavelength from 780 nanometers to 1,517 nanometers using two quantum frequency converters. Becher states, “This is close to the so-called telecom wavelength of around 1,550 nanometers.” Fiber optics transmission losses are lowest in the telecom spectrum. The conversion was performed with 57% efficiency by Becher’s team. In addition, they were able to maintain the high quality of the information encoded in the photons, a prerequisite for quantum coupling.

“The importance of our work is that we genuinely entangled two stationary particles,” says Tim van Leent, the paper’s main author. This is far more complex than entangling photons, but it offers up a vast array of new application possibilities. The researchers believe their method might be utilized to establish large-scale quantum networks and to implement secure quantum communication protocols. According to Harald Weinfurter, “the experiment represents a critical step on the route to the quantum internet using current fiber optic infrastructure.”

See also  Clusters of four neutrons have eluded physicists for some time, but they may have been detected recently
0 Comments Author Oliver Robinson