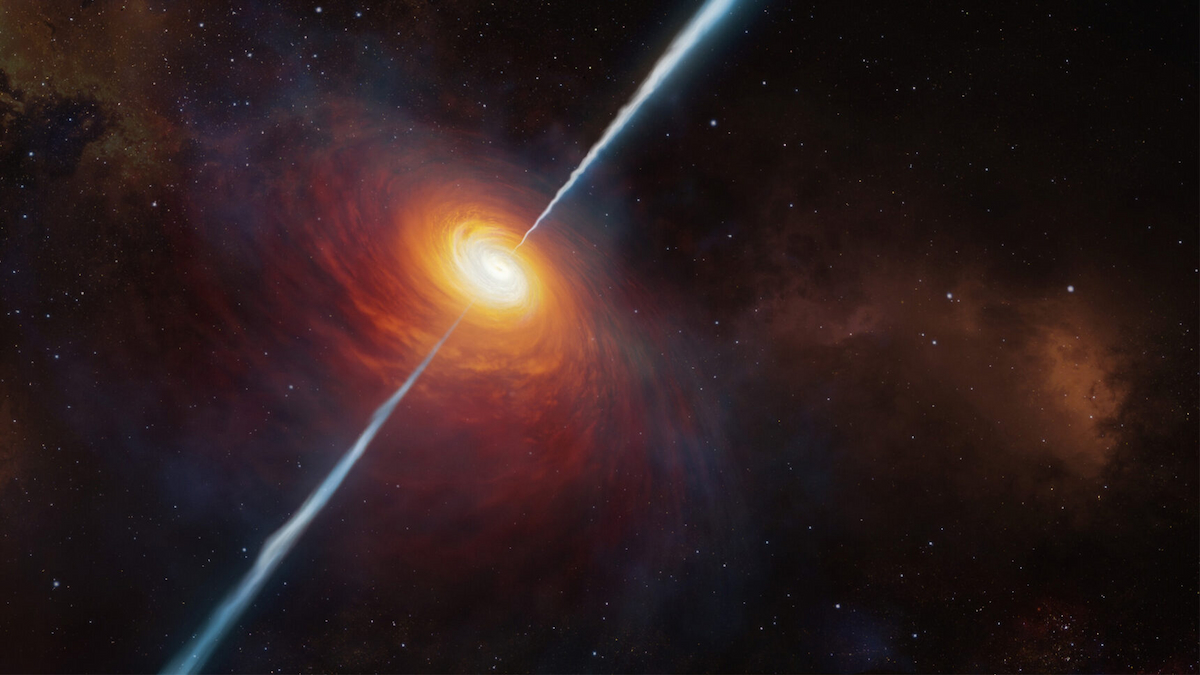 It is believed that this strong jet of energy is moving seven times faster than the speed of light, which is unattainable in our universe. According to a recent study, this quick speed is merely an optical illusion, yet it still reflects a burst of energy traveling towards us at almost the speed of light. The Hubble Space Telescope (HST) obtained magnificent images of the jet, which was ignited by an unusual collision between two hyperdense objects known as neutron stars and resulted in one of the most significant breakthroughs in astronomy history at the time it was found in 2017.

The jet reached at least 99.97 percent of the speed of light, which equates to nearly 670 million miles per hour, and raced right up to the edge of this impassable boundary, however it did not exactly exceed the cosmic speed limit. In a study that was published on Wednesday in Nature, astronomers led by Kunal Mooley of the California Institute of Technology used Hubble and other observatories to measure the jet’s “superluminal velocity,” or the surreal illusion of faster-than-light speed. According to Mooley and his coworkers, “we have shown in this work that precision astrometry with space-based optical and infrared telescopes is a good way to measure the appropriate trajectories of jets in neutron-star mergers.” “Due to the bigger collecting area and lower pixel size, the James Webb Space Telescope (JWST) should be able to perform astrometry far better than that with the HST.”

Because of how violently these neutron stars collided, gravitational waves—which are vibrations in spacetime itself—were produced. The merger took place 140 million light years distant, yet when it passed past Earth in August 2017, scientists were still able to pick up these minute vibrations. The gravitational wave (GW) 170817 incident, so named because it was found on that day, immediately cemented its place in space history. First of all, it was the first time that waves from the merging of two neutron stars had ever been recognized by scientists. At that time, a few gravitational waves produced by black hole mergers had been identified, but neutron star collisions remained a mystery.

Because black hole mergers do not emit visible light and can only be detected via the unique technique of gravitational wave astronomy, the nature of the objects is crucial. On the other hand, neutron star collisions, which are compact, turbulent structures created by the violent deaths of massive stars, do result in bright radiation bursts. There are a variety of insights that can be gained from the potential of simultaneously observing two distinct signals of the same event, in this instance gravitational waves and a light signal.

To search for the radiant explosion from the mergers, as well as the jets that these events blast out into space, astronomers hurried to direct as many telescopes as they could at the location in the sky where GW170817 began. Numerous telescopes that were monitoring the eruption as it subsided in fact noticed the collision’s spectacular afterglow. The accomplishment was a significant step forward in the study of multi-messenger astronomy, which entails the detection of various signals from a single event.

Now, five years later, data from Hubble, the Gaia observatory of the European Space Agency, and many radio arrays on Earth engaged in the discipline of very-long-baseline interferometry have contributed more information to this celestial mosaic (VLBI). The crew was able to observe the jet slamming into a mass that had been propelled to high speeds by the merger and was being launched into space by the merger. The jet appears to be traveling at a speed that is seven times faster than the speed of light, according to measurements of the blob’s velocity. Nothing, as far as we are aware, can go faster than light, with the exception of the universe’s expansion. The ultra-relativistic speed of the jet, which is moving just a little bit slower than the light it emits, is what causes the illusion of superluminal motion.

From our vantage point on Earth, the matter in the jet is just slightly following its bright light particles, or photons. Because the jet is essentially keeping up with its own light production, photons emitted in the early stages of its eruption may wind up arriving at Earth around the same time as photons emitted in the later stages. The jet appears to be going faster than light-speed due to this strange phenomena, which would defy our understanding of physics. However, the jet is actually just flying at or close to light-speed, which is still a rather astounding finding.

Mooley and colleagues have provided a road map for finding comparable traits in upcoming unions of neutron stars with their latest work. These efforts may help to explain some of the riddles surrounding these explosive occurrences, such as the possible connection between neutron star mergers and the short gamma-ray bursts, which are extremely bright flashes of light. The researchers wrote in their report that their work “represents, to our knowledge, the first appropriate motion constraint on the Lorentz factor of a gamma-ray-burst jet showing ultra-relativistic motion.”

“As long as they have favorable inclination angles and occur in relatively dense environments compared with GW170817,” the team concluded, “the combination of optical astrometry and radio VLBI measurements (with current observing facilities) may be even more powerful, and could deliver strong constraints on the viewing angles of neutron-star mergers located as far away as 150 megaparsecs,” equivalent to nearly 500 million light years.